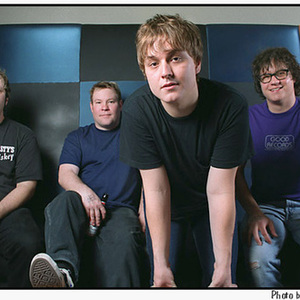 Superdrag is a power pop/alternative rock band from Knoxville, Tennessee. The band had a hit with its 1996 single "Sucked Out" off their album Regretfully Yours for which a video clip was broadcast regularly on MTV. Of all the bands with "Buzz Bin" videos in the second half of the '90s (The Refreshments, Wax, et al), Superdrag is the one of the few to tour consistently until their self-imposed hiatus in 2003.

Superdrag formed in the early 1990's when Knoxville guitar player Brandon Fisher began dating the cousin of John Davis. Davis, a bit younger than Fisher, began playing the drums in Brandon's band, The Used (posthumously renamed The Used to Be for a 2003 rerelease, and not to be confused with the Utah-based emo band), along with Tom Pappas, also Davis's senior by a couple of years.

After a relatively unsuccessful stint under that arrangement, a friend of the band named Don Coffey Jr. overheard Davis play a few songs he had written on the guitar and began playing the drums to them. Soon after, Pappas switched from his guitarist role to become the band's bass player, Fisher resumed on the lead guitar, and Superdrag was born.

The band released three vinyl singles and their first CD EP, "The Fabulous 8 Track Sounds of Superdrag" in 1995, and after having one of their a-sides ("Se&ntilde;orita") on a CMJ comp, soon released their first proper full-length, "Regretfully Yours" in 1996 after attracting the attention of Elektra Records. Their first single, "Sucked Out," was played frequently on MTV and the radio, but it would be their only mainstream hit; as a result, they were soon classified as a one-hit wonder. The video clip to the single "Destination Ursa Major" on the same album was Superdrag's second and last video to make it to television.

They were, however, given more financial support from Elektra to record their next album?on the condition that they write more radio hits ala "Sucked Out." The product was 1998's "Head Trip in Every Key", to date their most radio-unfriendly album, chock full of orchestras, pianos, sitars, organs, and other out-of-the-ordinary instrumentation. It was co-produced (along with the band) by Jerry Finn, who would later be successful producing albums for blink-182, Green Day and other radio-friendly artists.

It is believed by many that the intent of the band was to go purposely against Elektra's will with the overall sound of the album. Davis himself has admitted that they were taking advantage of the money Elektra provided to them in order to create the best studio album they could regardless of the label's demands for radio hits, knowing that Superdrag would probably never have that kind of funding again. Only one song, "Do the Vampire," received even minimal radio play and, as expected, Elektra Records subsequently cut most of the band's funding. Almost no touring was done in support of the album, and it remains unheard by many, though most die-hard fans consider it to be their greatest release.

The same thing happened to their fellow labelmates Nada Surf, with whom they had toured in July 1996, after the release in 1998 of their second LP, "The Proximity Effect".

After hearing what Superdrag had in store for their next release (and at the band's request, as well), Elektra dropped the band from their label before they were even finished recording their third full-length album. Pappas left the band to pursue his own career (notably with his three-piece Flesh Vehicle and as a sideman in live performance with Bloodshot's Bobby Bare, Jr.), and the band moved back east to sign with Arena Rock Recording Co., the New York-based label that put out their "N.A. Kicker" 7" single before Elektra came into the picture (they had also earlier dealt with another indie label, Darla). By 2000 they had taken on a new bassist, Sam Powers, and released their third full-length album, "In the Valley of Dying Stars", as produced by long-time friend Nick Raskulinecz with help from Don Coffey Jr, who was beginning to show a keen interest in life on the other side of the glass.

"In the Valley of Dying Stars" is by far the most emotional and raw of all of their albums; and, musically, in stark contrast to Head Trip's diverse instrumentation, Dying Stars kept to the standard rock format: guitar, drums, bass. The emotional core of Dying Stars emanates from the death of Davis's grandfather (his namesake), to whom John had been very close and had admired dearly. Davis' feelings on the record industry also emerged in songs such as "Keep it Close to Me:" "I want rock and roll, but I don't want to deal with the hassle. I know what I know, but I don't want to feel like an asshole."

With the absence of a major label or producer to influence their sound -- although Raskulinecz was originally committed to the project, he had just signed on to produce an album for Foo Fighters in Los Angeles -- Superdrag continued to evolve at their own pace, and in 2002 "Last Call for Vitriol" once again redefined the band's sound. Some of the songs moved toward a heavier, more alternative sound, while others were of pure country-western influence. Brandon Fisher had left the band prior to the release of In the Valley of Dying Stars, and Mic Harrison had eventually taken his place, adding a much more western feel to the guitar style.

Davis had turned heavily to alcoholism in prior years and many of his songs were about that very topic. One night, before the release of their last album, while driving to his parents' house, Davis pulled his truck over to pray, feeling that he had finally hit rock-bottom. He described the experience as life-changing, as he stated he felt a definite answer to his prayer. He was able to get away from alcohol, but felt that Superdrag was a mouth-piece for the life he had left behind, and simply didn't feel his heart behind it anymore. Upon completion of touring for Last Call, the band disbanded, playing one last show for Boston's NEMO music industry conference at The Paradise Rock Club on September 5, 2003; the show was documented with a Clear Channel-produced 2-CD release titled "Instant Live: The Paradise."

Coffey has been pursuing a career in recording and producing, operating Independent Recorders in Knoxville, TN and organizing an annual multi-day rock festival titled Hottfest, "Donnie Hott" being an inner-circle nickname for the drummer. Powers joined Guided by Voices as a fill-in bassist for their final European tour, returning to his pre-Superdrag job at Sony Music Publishing in Nashville and starting a family; a solo album is in the works from Powers. Harrison remains in Knoxville as a solo artist, often playing live shows with Knoxville rockers The High Score and former bandmate Coffey in his backing band.

Davis released and toured a gospel-influenced, spiritually-centered album -- titled "John Davis" -- in 2005. His second solo album, ?Arigato!? was released in 2007. He has also undertaken various work as a session musician, most notably with Allison Moorer, which led to European touring and an appearance on The Tonight Show With Jay Leno. He also plays guitar for The Astronaut Pushers, who released its debut album in 2005.

In April 2007, a collection of unlreleased Superdrag demos and rarities titled "changin' tires on the road to ruin" was realeased to complete their three album deal with Arena Rock Recording Co. It gained positive reviews in the press.

In July 2007, 6 Superdrag reunion shows were announced for October and November 2007, featuring the original lineup of Davis, Coffey, Brandon Fisher, and Tom Pappas. A new double-CD of early Superdrag recordings, ?4-Track Rock!!! 1992-1995? and ?The Complete ?Bender' Sessions,? is being sold exclusively at these shows.

On the 19th October, an interview with Davis was published in The Daily Times "It's kind of like a double helix, and it's a chain of thought I've dealt with in the past,? he said. ?I'm a Christian man, and I guess maybe my point of view initially was, does that mean I can't play Superdrag anymore? At first I thought the answer was yes, but there's an inherent theological flaw in that ? it means that God wasn't sovereign until 2001. Now, we both know that's not correct. He invented rock, and He invented our band, and He meant for us to meet and break up and reunite again. All of the dark times, that's pre-ordained by God, too, and He's sufficient enough to redeem even the darkest of dark times.

?Basically, before I made the decision whether to do it or not, I called Don and just asked, ?Do you want to play?'? Davis said. ?It was a very short series of conversations, and in five minutes or less of talking to each of the guys, it was pretty much unanimous that everybody wanted to do something and move it forward. A lot of the things about the situation before had fallen by the wayside; factors that had precluded us from continuing to play in this lineup aren't there anymore. And because we kept up good relationships with our management and our agent, the people that helped us to do our thing before were ready at a moment's notice to start gauging what the interest would be.?

?We knew there was only one opportunity to do this, to bring it back from the dead, so to speak, and we wanted to get it right. Not just for our sakes, but for the people who are going to take the time and effort to come out and see us do it. We wanted to make it first and foremost something our fans would enjoy, and I'm really pleased that the response has been amazing. It's been a completely positive experience."

In December 2007, two newly written songs on 4-Track were uploaded onto Superdrag's Official MySpace Page, "I Only Want A Place I Can Stay" and "Live And Breathe".

In January 2008, it was announced that along with the promise of more live shows later in the year (including a on April 11th in NYC), Superdrag will be going back into the recording studio in February to make their first new album with the original band line-up since 1998.

In March 2008, a couple of clips of Superdrag at Lake Fever Productions were uploaded onto YouTube, giving a preview of two new songs titled "Filthy & Afraid" and "Cheap Poltergeist", the latter featuring Tom Pappas on vocals and guitar. The clips can be found here and here.

The new album, Industry Giants, will be released by Superdrag Sound Laboratories on March 17, 2009.

Changin' Tires On The Road To Ruin

In The Valley Of Dying Stars (Japan Edition)