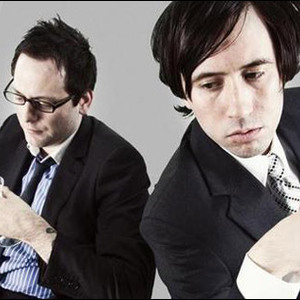 Growing up in the suburbs of Chicago in the 80's was a great time and place to be a kid. With plenty of bad weather and middle class parents, video games and music in the basement was where it was at. Merging the two past times into an artistic endeavor seemed like an obvious choice for Super 8 Bit Brothers' masterminds Rob Kleiner (Tub Ring, ex-Mindless Self Indulgence) and Kevin Gibson (Tub Ring, pet lover).

Super 8 Bit Brothers combines danceable indie pop with lyrics ripe with arcade lingo for people who'd rather stay inside or do a basement boogie.

Performing live at video game conventions and rock clubs with such artists as Mindless Self Indulgence, Electric Six, Foxy Shazam, The Show is the Rainbow, and Gil Mantera's Party Dream. Their stylish remixes have also charted on both the Billboard top 200 and CMJ top 200. In 2008 they performed live on Fox's "Fearless TV".

'Melee,' the bands 1st record, was released independently in 2005 which started a buzz in both the music and video game community. After some time working in their underground labs, S8BB decided it was time to present their new album 'Brawl' full of dance numbers and sing a long hits. Equally ready to fill the sonic space of rock clubs, arcades, and dance parties!