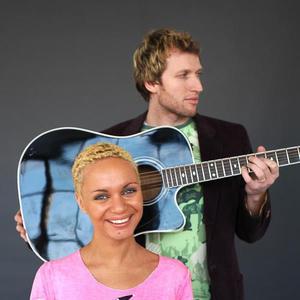 The band, Sunshine State, is based in Toronto, Canada. They started out more like a therapy session between the band's core members: James Bryan and Aleza Coldevin. James is already an established artist even before Sunshine State was formed. He is one of Canada's best-respected young guitarists, producers and songwriters, having penned over a dozen top 40 hits for various artists including Nelly Furtado, Fefe Dobson, and Divine Brown. He is also a member of multi platinum bands: The Philosopher Kings and Prozzak.

Aleza, on the other hand, was not in the music scene yet at that time. She lived in Montreal and moved to Toronto where she became friends with James. James found talent in Aleza so he invited her to sing in one of his solo albums. They instantly clicked. Aleza ended up touring with James' band, and the rest is history.

The other half of Sunshine State is composed of: Marc Rogers - one of Canada's top bassists (Susan Tedeschi, Philosopher Kings) who brings a low end warmth to the album with his acoustic bass, David Gouveia and Daniel Stone ? on percussions, adding a funky Latin flavor to the tracks, and Davide Direnzo who guest sessions as a drummer.

The band is yet at an early age but they have managed to break into the music scene at such an alarming pace. Having released a three song EP, Sunshine State secured a national Canadian tour opening up for The Philosopher Kings, and subsequently sold over 3000 CDs off the stage alone. Notable local DJ/tastemaker John Kong fell in love with the crowd favorite "Day Job" which led to the international release of several remixes on his Do Right label in January 2007. This 12 inch release, which included remixes from Toronto producer & DJ's Alistair Johnson & Circle Research, managed to sell out immediately in Japan & Canada, and won new fans in the UK.

Sunshine State's self-titled debut CD was finally released on May 2007 under James' own label, Umi Entertainment. The record instantly received rave reviews in both mainstream and underground press resulting in the nationwide release of "Day Job" on the highly acclaimed 2007 Honey Jam Compilation (Universal) as well as being featured on the underground compilation "Required Listening" also on Do Right Music. "Dayjob" is also the theme song for the radio & TV ads for the Greys Anatomy spinoff "Private Practice." The album is set to be released in Japan this February.

The band recently visited the sun-shiny city of Los Angeles and performed in several venues. As with all great music, the band instantly gathered a following. The crowds can't help but fall in love with the band's enigmatically engaging performances. One fan, one venue, one city at a time, Sunshine State is bent on dominating the music scene with their sun-shiny happy songs.