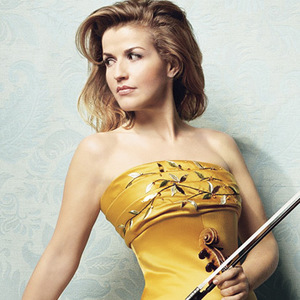 Anne-Sophie Mutter (born June 29, 1963 in Rheinfelden, Germany) is a German violinist. Mutter started playing the piano at age five. Shortly after, she began playing the violin, studying with Erna Honigberger and Aida Stucki. After winning several prizes, she was exempted from school to dedicate herself to her art. When she was 13, conductor Herbert von Karajan invited her to play with the Berlin Philharmonic. In 1977, she made her debut at the Salzburg Festival and with the English Chamber Orchestra under Daniel Barenboim.

At 15, Mutter made her first recording of the Mozart Third and Fifth Violin Concertos with von Karajan and the Berlin Philharmonic. The same year, she was named Artist of the Year.
In 1980, she made her American debut with the New York Philharmonic under Zubin Mehta. In 1985, at the age of 22, she was made an honorary fellow of the Royal Academy of Music (London) and head of its faculty of international violin studies. In 1988, she made a grand tour of Canada and the United States, playing for the first time at Carnegie Hall. In 1998 she played and recorded for CD and DVD the complete set of Beethoven's Violin Sonatas, accompanied by Lambert Orkis; these were broadcast on television in many countries.
Though her repertoire includes many classical works, Mutter is particularly known for her performances of modern music. A number of pieces have been especially written for or dedicated to her, including Henri Dutilleux's Sur le M?me Accord, Witold Lutos?awski's Partita, Krzysztof Penderecki's Second Violin Concerto and Wolfgang Rihm's Gesungene Zeit ("Time Chant"). She has received various prizes, including several Grammys. She also owns two Stradivarius violins (The Emiliani of 1703, and the Lord Dunn-Raven of 1710).
In October 2006, on French television, Mutter appeared to indicate that she would be retiring when she turned 45, in 2008. However the following month she said that her words were "misinterpreted" and that she would continue to play as long as she felt she could "bring anything new, anything important, anything different to music?.
In 1989, Mutter married her first husband, Detlef Wunderlich, with whom she had two children, Arabella and Richard. Detlef died in 1995. She married the pianist and conductor Andr? Previn in 2002, living in Munich with him and her children.
On 21 August 2006, Mutter's office announced that she and Andr? Previn had divorced. The couple were rumoured to have separated three months previously, but confirmed their divorce as of the above date.