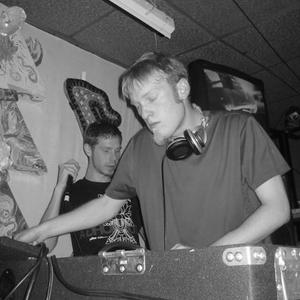 Suff-x (aka Bryce Elder), one of the Northwest's premier live breaks/drum 'n' bass acts, has been producing broken beat for over 6 years now. After having studied music technology at the University of Oregon for 4 years, and moonlighting as a pro audio tech, his production skills have been honed to a fine edge. His dynamic live set consists of sample triggering and juggling two Roland SP-808s and a Korg Kaoss mixer, as well as various effects. His ability to scratch using both Kaoss pad and Dimension Beam simultaneously have left many a trainspotter tripping on their own tongue.

Influenced by nu-skool breaks, IDM, and drum'n'bass, Suff-x has developed a techy sound highlighted by his insane drum programming and "bogus" basslines. Also in his repertoire is Suff-x's role as a sound designer, and resident performer for the Portland-based breaks collective Virus Breaks. The club night Virus! has been graced with recent appearances by Tipper, Atomic Hooligan, Incredible Melting Man, among countless others including Dov, which led to involvement with Muti Music. With a Muti release out soon, Suff-x now looks to bring his chopped beats and basslines to a wider audience.
Suff-x has past releases on Urban Renewal Records, "They Are What They Are EP" - 2001, So Broken Recordings "Dirty Trick EP" - 2005 and more recently on Muti Music, "CyberFreq & Electro Medicine EP" - 2006