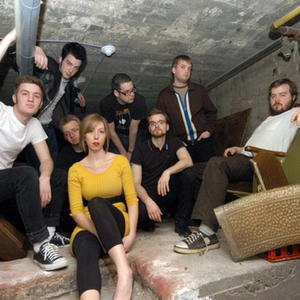 "We'll make your knees jerk when the beat starts to pound, we'll make you dance like there's no one around," is a promise that SubCity Dwellers make on their new album "When the Beat Starts to Pound" and keep every time the octet plays live. Winnipeg's own SubCity Dwellers first formed in 2002 and have climbed out of the back alleys, maturing to the cutting edge sound we now hear. They truly are a well-rounded, high energy dance band with a party in their back pocket.

The musical styles these artists offer are heavily influenced by their individual, wide ranging tastes and backgrounds - strong reggae, punk, soul, blues and rock'n'roll influences mix with lots of edge and occasional latin and roots feels for a truly danceable sound. Each member of the group brings their own personalized touch to both the studio and the stage, tipping a hat to their respective roots, which results in passionate, dynamic songs that "reveal uncommon depth and skill, not to mention a clear sense of history" (Adrian Mack, NERVE Magazine).

Their fresh SubCity sound keeps the dance floor packed and sweaty all night long with punks, moonstompers, hippies, rockers and everyone else - shoulder to shoulder for an unforgettable night of intense energy and the most fun you've had since?

Well let's just say this isn't a party you want to miss.

When the Beat Starts to Pound