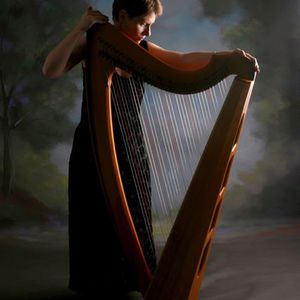 Anne Roos is considered at the top of her field as a Celtic Harpist. She is a many-faceted performer who excels as a soloist in concert, as well as with her ensemble. Her recorded music is aired internationally and is described as "lovely" and "enchanting". Anne Roos' love of English and Celtic music blossomed as a child and young teen at Southern California Renaissance Fairs, when she became involved singing in madrigal groups, performing period music.

Anne Roos' love of English and Celtic music blossomed as a child and young teen at Southern California Renaissance Fairs, when she became involved singing in madrigal groups, performing period music. She started playing the Celtic harp quite by accident. While employed at an incredibly stressful job, Anne serendipitously met Sylvia Woods at a booth full of little Celtic Harps at a Winter Solstice Fair and began taking private instructions from her as a creative outlet. Then came music theory courses at UCLA and eventually teaching music for the Los Angeles Unified School District.

Anne has performed throughout the U.S. for more than twenty-five years as a soloist at resort hotels, convention centers, cruise ships, concert venues, highland games, Celtic and Renaissance fairs, casino clubs, wineries, meditation retreats-- you name it. She has been invited to perform for several dignitaries, including the Lord Mayor of Dublin, Ireland. She makes her home at Lake Tahoe and continues to perform regularly, priding herself on the ability to be versatile and take requests: playing anything from O'Carolan's Irish music and Greensleeves, to Beatles and love songs and Stairway to Heaven, and just about everything in between.

Anne's CD projects demonstrate quality musicianship and versatility. Anne's albums are unique--Her recent releases are actually little books with CDs tucked neatly into the back page. She recognizes that her listeners enjoy reading about the background of the music on her CDs.

A Light in the Forest

Haste to the Wedding