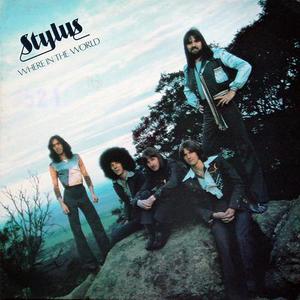 2008 - Stylus is currently on hiatus while the band members explore other musical opportunities.

Stylus' debut album 'PAINKILLERS' was released in October of 2003 on Wildside Records and is a refreshing mix of rock and funk with hip hop beats and undertones. The album received rave reviews and the radio singles 'Sick Of This', 'Backstabbers Incorporated', 'Never Again' and 'Keep Looking In My Direction (Incredible)' have been carving up airwaves on NZ Radio and Music TV ever since. Stylus have toured relentlessly through 2003 - 2005 including nationwide tours with Alien Ant Farm and Blindspott. Some performance highlights for the band include live shows on TV2's 'Top of the Pops' and a spot at the Crusty Demons 10th Anniversary show at Western Springs, Auckland.

Stylus' eagerly awaited new album 'GAIN CONTROL' was released June 10th on Wildside Record. With 17 tracks of catchy melodies, low-riding grooves and crunching guitars; this album is why your stereo comes with a repeat function!

Stylus' strangest income of late comes all the way from the USA as the band have recently had royalties filter down from the 2004 use of their song 'Sick Of This' on the soundtrack of MTV's ?Road Rules Challenge Gauntlet.? It was very fittingly used for an ice cream eating competition and has gained the band new fans from the states.

02) R3-643 > split 7" with Longstone (spiFFing Records). 9/97.
The single never got past Test Pressing stage and only 5 Test Pressings exist! spiFFing were a label based in New York, USA. The track will appear on the forthcoming Blue-Flea compilation 'Through The Square Window'.

04) Glass Dream One > appeared on 'Infrasonic Waves' Volume One 7" EP (Ochre - OCH026).
Released 2/11/98. Limited to 500. Other artists were: Avrocar / The Freed Unit and Brickwerk. The track featured the guest narration of Christine Vidoudez.

07) Grinding #8 > appears on the CD compilation album 'Trace' (Audio Research Editions ARE102).
Released 12/99. The Double CD Album was made up of two-minute tracks. Other artists include: Will Sergeant, The Groceries, Longstone, The Mindwinder, The Land Of Nod, Lee Ranaldo, Yoko Ono, ARPARP, Henry Priestman etc.

08) Angle > the track from the album 'The Last Seaweed Collecting Hut At Freshwater West', appeared on the 'The Wire Tapper 5' CD that was given out free to the 6000 subscribers of The Wire magazine in March 2000
.
09) Zero > the track appears on the CD compilation album 'Zero' (Audio Research Editions ARE103).
Released 4/00. The CD Album is made up of one-minute tracks. Other artists include: Will Sergeant, Lee Ranaldo, Skyray, Longstone, 90? South, The Groceries, ARPARP and The Land Of Nod amongst others.

11) R3-643 > appears on the 'Through The Square Window' compilation CD Album. (Blue Flea Records Blue-Flea10). Released 5/00. The album is a compilation of Ochre artists released in the USA on the label run by Windy & Carl. Limited to 1000.

12) Decelearation > appears on the front cover compilation CD of the Brazilian magazine 'Trip' in August 2000 (Ano 13). The track was originally intended for inclusion on the front cover of the December 1999 issue featuring 'Experimental & Electronic' music but although credited on the CD cover and in the magazine was left off and in it's place mistakingly was The Land Of Nod track 'The Land Of Nod (Sunrise)'. 'Deceleration' however finally made it on to the August 2000 issue (Issue 80) as a bonus track on the front cover CD which featured Brazilian Hip Hop!!!!!

22) Angle, The Cosmic Beekeeper and Migration > appear on the Ochre compilation album ?Themes:Volume One' (Ochre Records OCH:REEL001). 997 manufactured. August 2002. The compilation was aimed at the Film & TV Industry.

Where In The World

Part Of It All (Vinyl)

For The Love Of Music (Vinyl)