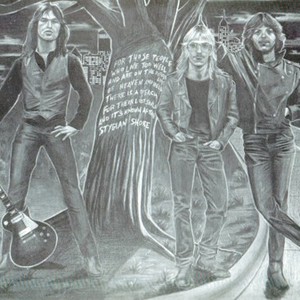 Stygian Shore is an American heavy metal band which released a self-titled EP in 1984 and were closely associated with well-known heavy metal band Manilla Road, due to both bands having the same hometown (Wichita, Kansas). Stygian Shore is made up of guitarist/vocalist Mike Palmer, drummer Peter Dawson, and bassist Greg Marshall. Following a 15 year hiatus, the band reformed in 2004 and signed to the highly acclaimed underground metal label Shadow Kingdom Records. On May 30th, 2007, their debut album, entitled "The Shore Will Arise", was released.

This album was actually recorded shortly before the band originally split-up in 1989. A new project is currently in the making and should be available later in 2010. youtube stygian shore for video of concert with some of the songs to appear on the next stygian shore project. Sam the Man seems to have come out the best on video.

Trivia: Bassist Greg Marshall lost his right hand in a car accident. He now has and utilizes the hook he has on his hand.