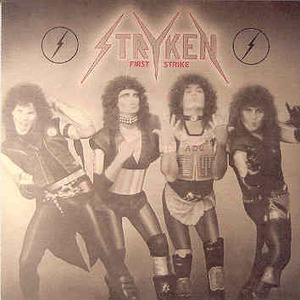 Stryken were often labeled a Stryper clone, more because of the similarity in their names than for their music or look. The fact is, Stryken were actually around since the late 70's with the name Stryker but changed their name to Styken when Stryper became popular. Stryken were also often criticized for their outrageous "armor of God" outfits, but as was the case with many early 80's metal bands, it was all just part of the show.

In 1986 Stryken released their first single containing the songs "Rock On" and "Surprise" to be followed up in 1987 with their 8 song debut album titled "First Strike" both on Chrystal Records. An official CD release was not made until 2006 on Girder Music.