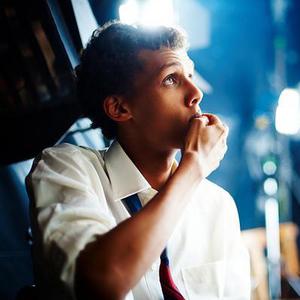 Paul van Haver, better known as Stromae (born March 12, 1985 in Brussels, Belgium) is a singer-songwriter from Belgium. Of mixed Belgo-Rwandan descent, he distinguished himself in both the hip-hop and the electronic music. He first became famous with the song Alors On Danse which remained at number one for several weeks in numerous countries throughout Europe. He was born to a Rwandan father and a Belgian mother. At the age of eleven Paul van Haver already showed an interest in music and attended 'l'Acad?mie Musicale de Jette', where he studied music history and learnt to play the drums.

He was born to a Rwandan father and a Belgian mother. At the age of eleven Paul van Haver already showed an interest in music and attended 'l'Acad?mie Musicale de Jette', where he studied music history and learnt to play the drums.

In 2000 he appeared as a rapper called Opmaestro, though he later changed his stage name to Stromae ("Maestro" with the syllables switched, a practice called verlan). It was with this name that van Haver became successful.

At the age of 18, he founded a rap group called Suspicion, along with rapper J.E.D.I. in Eichof. They produced the song and music video "Faut k't'arr?tes le Rap", though later, J.E.D.I. decided to leave the rap duo.

In order to finance his private school education, van Haver worked part-time in the hospitality industry, but his school performance wasn't up to standard. It was only later, when he registered at l'Institut National de Radio?lectricit? et Cin?matographie, that he released his first album "Juste un cerveau, un flow, un fond et un mic...".

In 2008 he signed a 4-year record deal with "Because Music" and "Kiloma?tre". In 2009 Paul worked a young trainee at the musical radio station NRJ in Brussels. Vincent Verbelen, Music Manager, was impressed by the talent of Stromae's first single Alors On Danse and decided to air it for the first time on NRJ. The response from listeners was one of extreme enthusiasm and Stromae's career was launched. Sales quickly rose to number one in Belgium in just a matter of weeks.

Vertigo Records, a label of Mercury Records France (Universal Music Group) signed him for a worldwide licensing deal soon after this. By May 2010 the track had reached number one in France, the Netherlands, Greece, Germany, Austria, Switzerland, Italy, Denmark, Belgium and the Czech Republic.