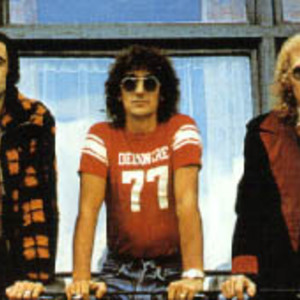 Stretch is rock band from the United Kingdom that grew from the collaboration between Elmer Gantry (real name Dave Terry) and Kirby (real name Graham Gregory) and was most popular in 1970s. Gantry was previously the frontman of Elmer Gantry's Velvet Opera. Kirby was previously a member of Curved Air. Stretch was a British outfit who recorded for the Anchor label. Their first LP was in fact "Elastique", produced by Martin Rushent, and now re-issued by Repertoire, enabling whole new generations to rediscover the power of a band once hailed as one of the hottest new names of 1975.

Stretch was a British outfit who recorded for the Anchor label. Their first LP was in fact "Elastique", produced by Martin Rushent, and now re-issued by Repertoire, enabling whole new generations to rediscover the power of a band once hailed as one of the hottest new names of 1975.

The start of the band had been quite controversial. In 1974 Fleetwood Mac manager Clifford Davis saw that group falling apart in the middle of an American tour with the departure of Bob Welch. Davis considered himself legal owner of name Fleetwood Mac. He named one of the other bands under his management Fleetwood Mac and sent them out to play the remaining shows of the tour. The result was unhappy fans, who paid to see another band and a lawsuit with the original Fleetwood Mac members that would stretch out for years. The fake Fleetwood Mac was renamed to Stretch and remained under the management of Clifford Davis. Needless to say that the reformed Fleetwood Mac, now with Lindsey Buckingham and Stevie Nicks as new bandmembers did not.

Stretch featured the fine vocal talents of one Elmer Gantry (who named himself in honour of the character in the Burt Lancaster movie Elmer Gantry). Elmer had previously led an outfit called Elmer Gantry's Velvet Opera, which released three singles in the late Sixties on the Direction label. They were "Flames", (1967), "Mary Jane", (1968), and "Volcano", (1969), all now collector's items. He also recorded a song called "Psychobabble", featured on an Alan Parsons Project Album "Eye in the Sky". They all helped establish Elmer's reputation as a fine, expressive singer and imaginative composer. Stretch was a much more bluesy kind of band and featured a hot young guitarist, and songwriter simply known as "Kirby". Elmer was the lead vocalist and also played some guitar. They made a strong team, ably backed by Steve Emery (bass guitar), and Jim Russell (drums), who also played with rock'n'roll revival band The Wild Angels. Stretch was augmented on the album by horn players Mike Bailey and Ron Carthy, saxophonists Mick Eve and Chris Mercer, and keyboard player John Cook.

The band had made a promising start and enjoyed the thrill of a hit single, when "Why Did You Do It" (written by Kirby and featured on this CD) got to Number 16 in the U.K. in November 1975. It spent nine weeks in the charts and seemed to signal the start of a hugely successful career.

The band followed up "Elastique" with "You Can't Beat Your Brain for Entertainment" (1976), and "Life Blood" (1977), all on Anchor, by which time drummer Jeff Rich had joined the band. The blond-haired young sticksman was later to find job security with Status Quo. The final Stretch record, "Forget The Past" was released on the hot wax label in 1978. Alas, none of these last two quite matched up to the power of their debut album and they couldn't manage to find the panacea of another hit single.

By the time they released "Forget The Past" the band had virtually disintegrated. One music expert described the last album, rather cruelly as 'pure trash'. Only Kirby and Steve Emery remained, using session men like Nicko McBrain (drums), from the Pat Travers Band and Trust, who went on to fame with heavy metal gods Iron Maiden. The writing was on the wall for the kind of rock band Stretch typified. Soon they would be replaced by much heavier metal bands like Iron Maiden, or the combined forces of punk and New Wave. Soon, it would no longer be enough simply to get on the stage, yell 'Rock on!' and play the blues all night. Bands needed an image, lots of special effects, dry ice and rings through their noses (not always in that order of course!). At their peak critics rated Stretch as 'the greatest British blues and boogie band of the era', and many spoke in whispered reverence of the crazed night in 1976, 'when they nearly blew Ritchie Blackmore's Rainbow off stage'. With the miracle of the CD re-issue we can now once again enjoy the excitement of the band 'at full stretch', on their first album as they stomp through Elmer Gantry compositions like "Miss Jones", "Miss Daisy", "Snakes alive", "Write me a note", "Tomorrow's Another Day", and "Buzz Fly". Most of the rest of the material was written or co-written by Kirby, including "Why Did You Do It?", "Down Home", and "Slip Away". "Navy Blues" was contributed by another bass guitarist, Paul Martinez (later with Paice Ashton & Lord).

The band eventually split up in 1979, when manager Davis decided to withdraw his financial input.

Stretch reformed in 2007 to coincide with a "Greatest Hits" collection, and toured in support of the Jeff Healey Band.

You Can't Beat Your Brain For Entertainment