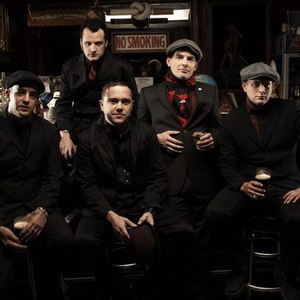 Street Dogs is a punk rock band hailing from Boston, Massachusetts. The lead singer is Mike McColgan, former lead singer of Dropkick Murphys. In 1998, McColgan left Dropkick Murphys, after releasing their first full-length record, Do or Die, to pursue a life-long dream of becoming a firefighter for the Boston Fire Department. Street Dogs formed in 2002 after McColgan decided he could no longer stay away from music.

In 1998, McColgan left Dropkick Murphys, after releasing their first full-length record, Do or Die, to pursue a life-long dream of becoming a firefighter for the Boston Fire Department. Street Dogs formed in 2002 after McColgan decided he could no longer stay away from music. Their first album Savin Hill was a complete success and resulted in a supporting tour with Celtic punk band Flogging Molly. The band underwent a complete shuffle in 2004 when McColgan emotionally quit his firefighting career to continue his musical career and to record their second album Back to the World, losing fellow ex-Murphys drummer, Jeff Erna and guitarist, Rob Guidotti. To fill that gap, the band enlisted Markus Hollar on lead guitar, and expanded the range of their sound with the addition of rythmn guitarist Tobe Bean. The spot on the drums was filled by Joe Sirois, who had formerly been with The Mighty Mighty Bosstones.

Their second release, Back To The World, proved to be even more of success for the band. It was hailed critically in the US, Europe and Japan and opened the doors to touring with the notable likes of Social Distortion, Tiger Army, Bad Religion, Millencolin (in Europe), The Bouncing Souls (US And Japan) and The Briefs. The band also toured on the Vans Warped Tour in the summer of 2005 and embarked on their first headlining tours in the US and Europe. Early 2006 saw more headlining shows in northeast US as well as an opening slot with the legendary band The Pogues in Boston on March 14. The rest of 2006 saw the band opening for more notable punk bands, including Rancid for a couple dates in early July, The Adolescents in mid-July?August and The Bouncing Souls in October ? December.

After their early 2006 tour dates, the band began pre-production of their next release, which took place in Boston, MA, Houston, TX and Los Angeles, CA. The album, Fading American Dream, was released on October 24th. It was recorded with producer Ted Hutt, who has produced such bands as Flogging Molly, Madcap, and The Bouncing Souls.

In 2009 they toured with The Offspring even making an appearance at the Punk Rocks festival at Red Rocks in Morrison, Colorado.

The Street Dogs are notable as their lyrics relate to the working class and there is no doubt that they draw influence from the likes of Billy Bragg with their "fight for the worker" attitude.

The current line-up of Street Dogs is:

Stand For Something Or Die For Nothing

War After The War (CDS)