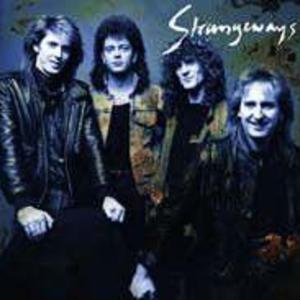 Strangeways (AOR) One of Glasgow, Scotland greatest AOR band ever. Strangeways had a couple of remarkable releases in the eighties. Notable are the names behind the recordings, because being a new band in 1986 and having guys like Bob Ludwig and Kevin Elson (Europe, Journey, Night Ranger) working on your debut album is not a bad case at all. Anyway, the debut of Strangeways contained some great piece of pure American oriented AOR with many keys and harmonyvocals.

The band was clearly influenced by AOR bands such as Loverboy, Foreigner, Night Ranger and Journey that were topping the charts in the USA at the same time.
The follow up "Native Sons" were probably their biggest success, combining Harmony vocals from earlier release combining with a much more delicated production.

Are 6, predominantly Northern lads who met at university in London, thriving on their 'ragbag' of underground styles and their punkoid dual vocal attack.

Now after a year locked away in the studio, shedding bucketsfull of blood and sweat, they emerge to welcome 2010, armed with a truckload of new exhilerating tracks and having inflamed interest in all the right quarters by their full on juggernaut of a live performance.


Strangeways (electronic)
Consistently creating new formulas for electronic music with their unique experimentations, Strangeway blend alternative rock lineaments with programmed features, therefore delivering sole fusion compositions. Joseph Sepia (keyboards, guitar) and vocalist Ari Zider were the founding duo of Strangeway, in 1992, in Ontario, Canada. Sharing a common musical experience in the electronic music field, the two-team started discovering original interpretations for synthesized creations. While seeking the third element for the set, Zider abandoned the project, returning after Sachin Sud had become the unit's long-awaited third element, and the group's main songwriter. After finalizing their lineup, the Canadians entered the studio to record their debut album, The Calm Before the Storm. ~ Mario Mesquita Borges, All Music Guide

Where Do We Go From Here?

Walk In The Fire