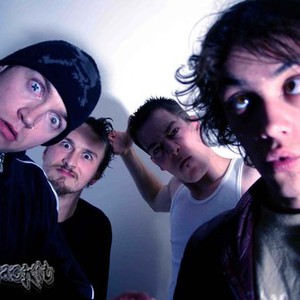 Strap in and brace yourself. Ladies and gentlemen, this is the sick funk. What is the sick funk?? Since 2001 this metal/hard rock 4 piece from Vancouver, Canada have been blending aggressive beats and guitars with heavy, yet funky stylings along with their trademark distinctive vocals for an overall head bashing, kick-in-the-pants audio assault. In an ever growing industry full of clones and bands intent on sounding like everybody else around them, Str8jackit has been steadily pushing the boundaries of their melting pot approach to writing music.

From A-Z and everything inbetween, the band have borrowed all sorts of spices for their delicious lean mean metal dish. This uniqueness has garnered them a worldwide fan base and just recently their second album ?Puttin' the ass in Class? received ?Best Metal Album of the Year? honours from Just Plain Folks, an elaborate community of 40,000 of their peers including artists, labels, producers etc. After a couple of demos, St8jackit released their first full length album, Donkey Child Pt. 2 in December 2002 on Railjaw Records. An aggressive interbreeding of funk, hip-hop, rock and metal, Donkey Child resembled a bloody death match between Pantera, Eminem, System of a Down, Snot and the House of Pain. Their second release ?Puttin' the ass in Class? was released August 2004. ?Ass in Class? showcases Str8jackit's diversity throughout with songs heavier and lighter. Both albums are hook laden rollercoaster rides interlaced with their signature funky, heavy style accompanied with acoustic guitars, pianos, cellos, and clever sampling that is distinctive to Str8jackit. Through local shows, radio, video games, soundtracks and compilations, X-Games videos, underground ?Jackass? style videos, word of mouth and the internet, Str8jackit have sold over 2000 CD's worldwide. Their brand new third album ?Full Metal Jackit? have them incorporating all things heavy borrowing from traditional and modern metal with splashes of punk and funk. In traditional Str8jackit fashion, the album takes you for a ride with interesting time signatures, twisted 4 part harmonies, tight angular guitar playing and a rhythm section that can at times have your head nodding and pummel you into a wall within the context of one song. The band are now being distributed through Tower Records, Amazon, Yahoo, A&B Sound, Itunes, CDBaby and many others and are currently negotiating with more distribution companies worldwide to help push their three albums. Playing the local Vancouver scene since 2001, the pioneers of the sick funk have been building up an impressive following and live show. With one western tour to L. A. and back under their belts, and one being planned for 2007, these boys are definitely on the rise.

Puttin' the ass in class