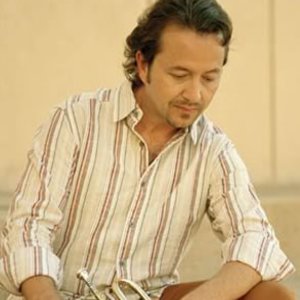 Steffen Kuehn was born and raised in Germany and began playing the trumpet at the age of eight. Twenty years later he received his Bachelor of Music from the prestigious University of North Texas in 1993, majoring in Jazz Trumpet and Jazz Studies. While at North Texas, he received two Down Beat awards for being a member of the ?Two O'clock Lab Band' that was voted ?Best College/University Band' in 1991 and 1993.

While at North Texas, he received two Down Beat awards for being a member of the ?Two O'clock Lab Band' that was voted ?Best College/University Band' in 1991 and 1993. After working on cruise ships and a 3 year stint back in Munich, Germany, he decided to make the San Francisco Bay Area his permanent home. Concentrating on his playing and songwriting, the move proved to have been the perfect decision.

Soon after his arrival in the Bay Area he hooked up with LA publisher Monica Benson who started signing Steffen's music to her company ?Wild Pink Music'. The first big breakthrough came with placing the original composition ?trumpop' in the Miramax movie ?Birthday Girl', starring Nicole Kidman and Ben Chaplin.

Being interested in Straight Ahead Jazz, Smooth Jazz as well as in Latin Jazz and Salsa, Steffen scored big in 2002 with the CD release ?Now or Later? of his Jazz Nonet, that featured 2001 Grammy Nominee Tim Hagans. That year also marked the inception of his own record label ?stefrecords'.

Fast forward to 2005: Having joined the Latin Jazz orchestra of legendary timbalero Louie Romero, the band recorded its first album ?Timbalero' and released it on ?stefrecords' in 2006 to rave reviews.

In the meantime Steffen kept writing and recording for his 2nd release, entitled ?trumpop'?

Having secured the producing/engineering skills of Peter Horvath (keyboardist with Victor Bailey) and guitarist Ray Obiedo (Herbie Hancock, George Duke), this record shaped up to make some big waves?..

Since it's release in March 2008, the CD ?trumpop' has been in the Smoothjazz.com Top 50 Indie Radio Charts for 20 consecutive weeks and has received over 3000 airplays nationally and worldwide (October 2008). Furthermore, Steffen's song ?One for Louie' (from the ?Timbalero' CD) was placed in the USA Cable Network summer blockbuster series ?Burn Notice', airing in January 2009 (it also charted at No. 2 in ?Latinbeat Magazine in 2007). 4 more songs off the ?trumpop' release have been signed to Monica Benson's ?Wild Pink Music' company.

Steffen has headlined and/or performed at many festivals and major clubs internationally and nationally such as the the San Jose Jazz Festival, San Francisco Jazz Festival, Yoshi's Oakland, The Knitting Factory, Kuumbwa Jazz, Jazz & Blues By The Bay, Yoshi's San Francisco, Oakland City Center Fall Music Jazz Series, Jazz at Pearl's and many others.