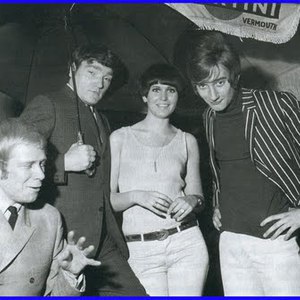 Steampacket was a British blues revue of the 1960s, notable mainly for the fact that so many of its members subsequently became famous later on. Group founder Long John Baldry had an eye for talent and brought in a young Rod Stewart, female singer Julie Driscoll, organist Brian Auger and for a time even a young Reg Dwight was involved, (later better known as Elton John). Rod Stewart self effacingly describes the act as "Like a white Ike And Tina Turner show, but nowhere near as good".

Steampacket played a circuit of clubs, theatres and student unions around the U.K, a stint including supporting the Rolling Stones on their 1965 British tour. Because of financial & contractual difficulties, however, they never formally recorded a studio or live album. Legend has it Auger wanted Stewart out of the group because he was making too much money, and Long John Baldry agreed, basically ending the group.

Stewart left in 1966, and the group disbanded soon after. Tracks from some demo tapes made at a rehearsal in the Marquee Club in London were released after the band split.

Long John Baldry pursued a solo career, soon had a Number 1 hit in the UK in 1967 with "Let The Heartaches Begin" and had a long career run before his death in 2006. Julie Driscoll, Brian Auger and Vic Briggs formed Trinity, and had a big UK hit in 1968 with "This Wheel's On Fire". Rod Stewart was the late bloomer of the group, who sang for a short stint from 1967-68 with the Jeff Beck Group, later joined The Faces at the very tail of the 1960's and eventually became a massively successful multi-platinum solo artist whose hits keep coming into the 21st century.