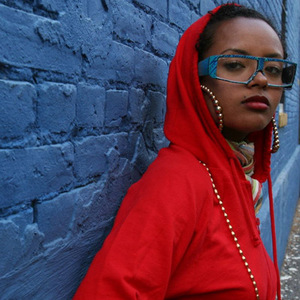 One event stands out in emcee/songstress/musical super-heroine Stacy Epps' memory as a pivotal point in her evolution. In 2005, she visited Cape Town, South Africa for six weeks. Early into her trip, she was hanging out at a local hip-hop club when fate threw a golden moment her way. ?This guy came up to me and asked me if I was Stacy Epps,? she recounts, still blown by the experience a full year later.

?It just blew me away that he recognized me, that people really research me to even find out what I look like. Then they played my record in the club. It was just amazing to me how far my music had spread, and that people in the Muthaland were familiar with and appreciated my music.? The song the deejay played that night was ?Eye?, a track from MF DOOM and Madlib's collaboration album Madvillainy (Stone's Throw, 2004) which Stacy guest appeared on, propelling her to buzz status on the independent hip-hop scene. And her chance encounter that night in Cape Town was, much like the song itself, one more in a long procession of signs that line the road to her destiny as a vocalist without boundaries, a singing, rapping, vibing conductor of emotion, soul and sweet spirit. Like all superheroes, it is a destiny that took her a while to fully embrace.

Stacy's powers began developing from the day she hit the ground. Born of mixed heritage (Black, Japanese and Native American) to military parents who spread her childhood between Georgia, Virginia, Washington D.C., North Carolina, Germany and Hawaii. She is a child of the world, from the places and experiences that shaped her to the blood that runs through her veins. Ironically, it was during a stint living in upstate New York back in 1990 that she became formally acquainted with the culture that would go on to take the world over: Hip Hop. Yo! MTV Raps, KRS One, Rakim, & Salt & Peppa sparked her curiosity and love for the music. But it wasn't until she moved to Charlottesville in 1997 to attend the University of Virginia that the words of Nas, Biggie and Jay-Z moved her to jump behind the mic at freestyle sessions she organized around the city, where she would sing and rhyme in equal doses. It was at this time that her alter-ego began to take root and form, as she found herself constantly freestyling & working on her craft. The artist within her began taking her first furtive steps out from behind Stacy's shadow even as every day brought her closer to a degree and a textbook life.

After moving to Atlanta upon graduating from UVA with a BA in Sociology and African-American Studies in 2001, the coming fork in the road only loomed larger, as studio work with producer/rapper Tariq L & Scienz of Life started to increase her stock on the underground. Collaborations with Scienz Of Life on their sophomore album, Project Overground; culminated in Sol Uprising, a side group consisting of Stacy and Scienz Of Life member Lil Sci, who came together to release the well-received Sol Power (Shaman Work, 2004). This same year Stacy moved to Los Angeles to attend USC Law School for her post-graduate degree. It was through Sci that Stacy landed a guest spot on ?Impressionz?, a song on the Take Me To Your Leader (Big Dada, 2003) album from King Geedorah a.k.a. MF DOOM, who in turn personally requested that she appear on the Madvillainy album. Then in 2004, she made a guest appearance on OH NO's album The Disrupt lending her vocals to the love song ?I Can't Help Myself?. Omens like these, coupled with repeated readings of Paulo Coelho's The Alchemist finally convinced her to give her life to the beat, turning down a weighty law firm job offer early in 2006 to focus on recording her upcoming solo project, scheduled for release in late summer/early fall of 2007. Also, look out for many guest appearances by Stacy Epps on Jneiro Jarel's latest project, Wildchild's upcoming project, Cris Prolific's album, the Jazz Liberators' project. In the end, for her, the choice was no choice at all. "If I can bring people together in any way then I feel like I've done what I was brought in this world to do.? The enlightened words of Gandhi guide her on this path?.