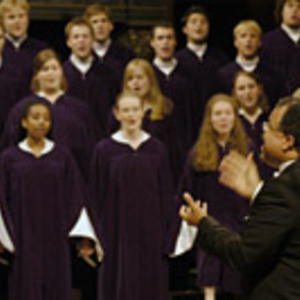 The St. Olaf Choir, a 75 voice mixed ensemble, is the touring a cappella choir of St. Olaf College, Northfield, Minnesota. Officially founded in 1912 by music faculty member F. Melius Christiansen as the St. Olaf Lutheran Choir, it began as an outgrowth of the local St. John's Lutheran Church, where Christiansen was organist. The choir was composed at least partly of students from the nearby St. Olaf campus.

The St. Olaf Choir is a pioneer of a cappella singing in the United States, born out of Christiansen's appreciation of the style he studied while at Thomasschule in Leipzig, Germany, at whose church J. S. Bach had been Kapellmeister more than a century earlier.

The choir tours for two weeks domestically every year in February, during the college's week-long interim break and the first week of second semester. In the summer of 2005, the St. Olaf Choir, St. Olaf Band and St. Olaf Orchestra traveled on a joint tour to Norway, celebrating the college's Norwegian heritage and the centennial of Norway's independence.

What Child Is This? The St. Olaf Christmas Festival