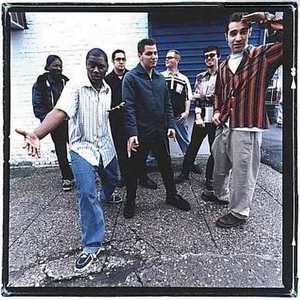 Spring Heeled Jack U.S.A. was a third wave ska band based out of New Haven, Connecticut. The band was formed by guitarist/vocalist Ron Ragona and drummer Dave Karcich in 1991. After a short breakup, Ragona and Karcich reformed the band with a new lineup. This lineup would record two albums before announcing a hiatus in 2000. While the band members moved on to new bands, their intention was to play the occasional reunion show. This idea was would never come to fruition due to Karcich's sudden death in 2002 after suffering a brain aneurysm.

Shortly after forming the band, Ragona moved to Boston, to play guitar for Skavoovie and the Epitones. After six months in Boston though, Ragona returned to Connecticut and reformed Spring Heeled Jack. The only other returning member would be Karcich. By the time the band decided to record its first demo tape, the lineup consisited of Ragona on vocals and guitar, Karcich on drums, Mike Pellegrino on vocals and guitar, Rick Omonte on bass, Chris Rhodes on trombone, Pat Gringas on trumpet and James Riley on saxophone. The demo tape was titled CT Ska and was released in 1993. The band played many shows and soon had a devoted following amongst the strong New Haven ska scene. The band would also contribute studio and live songs for various ska compilations over the next few years.

The band's popularity did not escape notice by Moon Ska Records, the label owned by Robert "Bucket" Hingley, of The Toasters. The label signed the band and had them start recording their debut album. By this time, the lineup had gone through some changes. Gringas had left, and was replaced by Tyler Jones. In 1996, their first album, Static World View was released. At some point, Riley had decided to leave the band. As a result, half of the album featured his saxophone playing, while the other half was played by (re)Pete Wasilewski. Wasilewski had played with Rhodes in the Connecticut band, JC Superska. By the time the band started touring for the album, Wasilewski had become a full time member. The band also filmed one video, for the song, "Pay Some Dues." To support the release of the album, the band started touring, a lot more, outside of their usual hometown base. During that time, ska started to break into the mainstream, due to hits by bands like No Doubt and The Mighty Mighty Bosstones. Major labels started looking for ska bands to sign. This led to Spring Heeled Jack's eventual signing with Ignition Records.

Ignition Records was a spin-off label of Tommy Boy Records. They booked the band to record at the legendary Hit Factory recording studio. The same studio had been used by musicians such as John Lennon, Bruce Springsteen, & The Rolling Stones. The resulting album was Songs From Suburbia, released in 1998. To promote the album, the band toured extensively, with bands such as Reel Big Fish, The Mighty Mighty Bosstones and Dance Hall Crashers. One performance was filmed for an episode of the HBO music show, Reverb. They also played several dates on the 1999 Warped Tour which also featured Eminem. The band then filmed their second video, for the song "Jolene." It received minimal MTV airplay but a clip of the video appeared regularly as part of the introduction to the daily MTV show, I Spy Video. Things seemed to be going really well for the band when it was announced that, due to a merger, Tommy Boy Records would be dissolving the Ignition Records imprint. Suddenly, the band had no more record label and therefore, no more label support. As this was happening, the band were in the middle of what would be their final tour of the West Coast. A friend of the band, Kyle Herrman, toured with them for several days and filmed what would become the documentary, Mass Appeal Madness. While inititially only available at their final show, it would be sold on the internet for several more years.

Shortly after being dropped by their label, Dave Karcich decided to leave the band, in pursuit of making new music. He played, what was to be his last show with the band, in Long Island. Soon after, the band set out to find a replacement drummer. The band had their next show booked for Rutgers University in New Jersey, yet still had no drummer. Karcich came through and played drums for them, one more time. It was after this show, that the band announced they were going on hiatus. The goal was to continue recording music and playing shows together, without the constant extensive and expensive, touring. In the meantime, they'd be free to pursue new bands and projects. They announced their final show, for the time being and it was held at Toad's Place in New Haven, Connecticut in May, 2001. The unfortunate part was that by the time the show was booked to happen, Chris Rhodes had joined The Mighty Mighty Bosstones. In his place, on stage, a microphone stand stood with one of his shirts hanging from it. Earlier that day, the Bosstones had recorded a performance on David Letterman. The club had a giant screen airing the TV show and when the Bosstones segment aired, Spring Heeled Jack called Rhodes via cellphone. Together, the band and audience sang a variation of the Bosstones song, "Where'd You Go," entitled "Where Is Chris Rhodes," to him.

Almost immediately, rumors about the next possible reunion, began to surface. The band did plan to play the occasional show but all of those plans came to halt in April, 2002, when Karcich suffered a sudden brain aneurysm and passed away. Eight months later, a tribute show was held at Toad's Place, in honor of Karcich. Each band that played the show, had some connection to Karcich's life. The show ended with the one night reunion of Spring Heeled Jack. Various drummers that had been friend of Karcich, took his place during the performance. Over $8,000 was made and put into a scholarship fund, in Karcich's name.

Where Are They Now?

Since the split, all seven members have continued working in music.

Ron Ragona became the singer for Lost City Angels, and released two albums with the band before departing in 2006. He has since become a member of the band, The Murder Mile.

Tyler Jones played in Reel Big Fish, for a brief time, before leaving the band. He plays on several songs on their Cheer Up! album.

Mike Pellegrino now performs with Lord Fowl, a New Haven based three piece rock band. He also performs, from time to time, with Cenzo, a band he helped form with Karcich and former Pilfers and Bim Skala Bim member, Vinny Nobile, for a World Trade Center benefit show in 2001. Future shows did not feature Pellegrino but in 2005, he returned to the band. Pellegrino also briefly played with Ragona in Lost City Angels, before joining the Connecticut based band, Ladyfriend. He appeared on Ladyfriend's album , I Am An Autumn, before leaving the band who then changed their name to Welcome.

Rick Omonte remains a strong part of the New Haven, Connecticut, music scene. He plays bass for the band Crooked Hook, as well as The Mountain Movers. When not playing music, he books bands for Sunday nights at local New Haven club, BAR.

Chris Rhodes played briefly with Bim Skala Bim before joining The Mighty Mighty Bosstones. He appears on their A Jacknife to a Swan album and wrote the album's single, "You Gotta Go." After their breakup, he started playing with The Toasters, where he continued to play until his departure in 2006. Rhodes has also been know to perform with Omonte, in The Mountain Movers, and briefly toured with Less Than Jake in 2004.

Before his passing, Karcich had also been a member of Pilfers & Cenzo. At the time of his death, he was a member of Avoid One Thing with former Bosstone, Joe Gittleman. Although featured in the artwork, for their debut release, he did not actually play on the album.

After the Long Island show, which was planned to be Karcich's last performance with the band, there was only one occasion where all seven members were in one room at the same time. Wasilewski could not be present at the next show in New Jersey and Rhodes was not at the final show. The occasion that brought them all together was a mutual friend's party in New Haven.

The Spring Heeled Jack horn section appears together on the song "Do The Devil" by The Amazing Royal Crowns.

Tyler Jones appears as the trumpet player on the entire Change Up album by the Skalars.

For a time, when Chris Rhodes wasn't busy touring with SHJ, he also played trombone for the New Haven funk band, Boogie Chillun.

After leaving SHJ, Karcich temporarily filled in on drums for Mephiskapheles. He had also auditioned for the band 2 Skinnee J's before joining Pilfers.

No member of SHJ performed at every single show in the band's history. Karcich and Ragona were the only two original members and they both missed one show each during the Songs From Suburbia era.

Most fans know that the song "Jolene" is about the band's old tour van. Not everyone knows that the van featured in the video is the very same van. By the time the video was filmed, the van had been sold and a new one had been purchased. The band didn't feel right about doing the video without the original van and it was bought back. After filming, the van was sold yet again. Some Connecticut fans were upset when the fake license plate, shown in the video, was from New York. This was a circumstance of the video being filmed in New York City though and therefore the plate that was made was from New York as well. Soon after the video was shot, the band featured a contest on their website that allowed a fan to pick a name for their new van. Once all of the submissions were in, the band decided on "The People's Van" as the name.

The USA addition to the name was the result of a legal agreement with the British electronic band, Spring Heel Jack. It was done strictly to avoid confusion on album covers and live performances. While some considered it an actual name change, the band never referred to themselves as anything but Spring Heeled Jack. Rumor has it that Spring Heel Jack was to add UK to their name, as part of the deal, but this never happened.

The band recorded several songs that were never released publicly. One of the songs was a cover of The Stray Cats song, "Sexy & 17" which was reguarly performed at live performances. A second song was titled "Lonely." A third song, titled "Josie," was submitted for use in the Drew Barrymore film, Never Been Kissed but it was rejected. "Josie" was the name of Barrymore's character in the film.