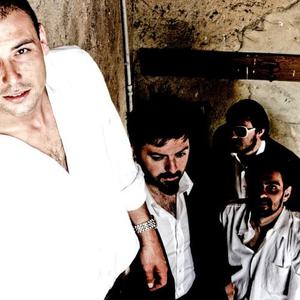 Spread is a side project of Dave Navarro (Jane's Addiction, Red Hot Chili Peppers) and Chad Smith (Red Hot Chili Peppers) that started during off time from the Chili Peppers. The group was originally known as Swallow but there was already a group by that name, so they changed the name to Spread. Some of the Spread songs had roots in a soundtrack Navarro and Smith had worked on for a friend and the EP Rhimorse, an unreleased collection of songs Navarro worked on in late 1995 while healing from his divorce.

The Spread songs were to be released as an album entitled Unicorns & Rainbows: The Pelican. Navarro adopted the unicorn as a symbol of the Spread project. The happy imagery of unicorns and rainbows was to be a stark contrast to the contents of the album. Immediately after the Jane's Relapse tour, Dave took the Spread album to his label Warner Bros., but they rejected it and said it needed more work. When Dave left the Peppers in 1998, Chad decided to leave Spread and fully commit to the Peppers. This album eventually turned into Dave Navarro's solo effort "Trust No One" but it is wildly considered that the demos of the Spread songs are far superior to the Trust No One versions.