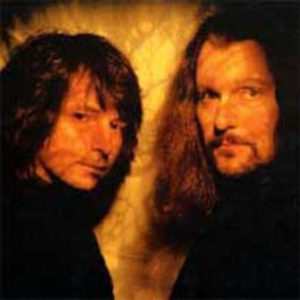 A project helmed by co-producers David Evans and Jimmy Waldo, Spirit Nation blended trip-hop grooves with Native American vocals courtesy of Judy Crescenzo of the Tucuhnut Tribe. A self-titled debut album was released in late 1998. Spirit Nation combines ambient beats with Lakota Indian chants and lyrics. Though we may not understand the words, the content of the songs can be surmised from titles like "Spirit Path" and "Sacredness." Translated lyrics such as " I am walking the sacred path/I am walking the sacred Earth" show the celebration of Native American spirituality and values.

Judy Crescenzo provides resonating, full lead vocals. Lush keyboards, flutes and various ethnic instruments are set to programmed beats and live percussion to round out the songs. The combination works, the pairing of modern technology and ancient instruments flows seamlessly with the beautiful vocals and melodies.

This is a rather good, if sometimes predictable, groove-laden blend of native american shamanism and new-age mysticism, infused with a dose of high-tech electronica. At the heart of Spirit Nation is the duo of guitar wizard Steve Rosen and keyboard maestro Jimmy Waldo. The album's strengths -- native american culture and spirituality, and rock-solid muscianship -- are frequently sabotaged by the bland new-age gloss of the arrangements, and a tendancy towards robotic drumming / drum-machine programming. Oh for some Bonham-esque thunder or Bruford-ish off-time jazz-rock flash to grab the compositions by the scruff of the neck! Still, the spiritual vibe at the heart of the project, and the moments of shining brilliance make this worth repeat listenings, since "Spirit Nation" shows enormous potential. When the project steps away from new-age cliches into the embrace of its native american heritage, or strives for something imaginative by exploring ideas found in modern progressive electronica, the album comes alive. This makes up for the fact that the composers tred dangerously close to lazily recycling the same formulaic set of ideas. Peripherally of interest to fans of progressive rock because of the strong keyboards, and Waldo's obvious understanding of the emotional impact in the retro sound of mellotron strings and choir.