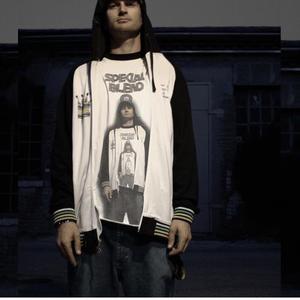 http://www.spinzhiphop.com Oxnard, California - July 22, 2011 In the early 1990s, the underground hip hop scene was controlled by the West Coast, every top college track was high in percussion, low in bass and seemed to hard for most outside the east coast skyline. That's not to say their brand of hip-hop wasn't good, the West Coast did invent gangsta rap if you want to get critical. But this style can be considered early boom bap and at the time proved effective in the nurturing of the genre by creating a big sound.

In the early 1990s, the underground hip hop scene was controlled by the West Coast, every top college track was high in percussion, low in bass and seemed to hard for most outside the east coast skyline. That's not to say their brand of hip-hop wasn't good, the West Coast did invent gangsta rap if you want to get critical. But this style can be considered early boom bap and at the time proved effective in the nurturing of the genre by creating a big sound.

What Spinz has on the table is something that was started when he was ?shooting, scoring, from the Ox to Switerzland? on his now highly acclaimed boom bap revival track from 2007 , ?Knock That Door In? produced by Swiss producer DJ LKB, whom he made ?Life, Love and the Low End? in 3 days in a studio in Switzerland. Releasing the album on his own moniker Vibra Music Group to highly acclaimed reviews by Okayplayer, XXL Magazine, as well as being named Urb Magazine's ?Next 1000? artist featured in the magazine alongside Amy Winehouse, Bishop Lamont, and Kid Sister.

Spinz triumphant march to indie hip hop kingdom came after releasing 12? singles like ?1 In A Million Ft. Koolade? produced by platinum hip hop producer Koolade in 2009, and ?Ready Steady? Produced by Top 100 electro DJ and producer Umek B/W ?Simple Man Ft. Frenkie & Ariano? which has been featured on Soulassassins.com and listed on the hot list of L.A. Times.

Spinz vinyl fetish has kicked in again with his latest 45, ?Gamez featuring Famous Fame? his latest collaboration with Famous Fame (Mark Young), member of Oxnard,California group Nevamind and longtime associate of Spinz, sharing the same management and promotional agency FND Entertainment. 20 years in the making to be exact, because Spinz and Famous Fame grew up together going to the same high school, and later doing shows alongside Spinz and his early-career band The Dirt Farmers.

For Spinz new single he brought back old comrade and Swiss producer DJ LKB and made a classic high in percussion, low in bass sound and chopped the samples close to perfection. West Coast underground hip hop at it's finest, while still appealing to east coast ears. Spinz continues to push a heavy sound in his music while maintaining his raw passionate vocal lines that blend into the natural delay of the song, while Famous Fame brings a powerful voice over witty punch lines that make the two blend together in perfect hip hop harmony.

-Vibra Music Group 2011
Spinz was born Scott Lykins in the Ford era in Oxnard,California. From the time he was born he was thrown into the reality of the California foster care system. To this day he has yet to meet his birth parents and always struggled as a child with his own identity. So Spinz turned to music for his life's guidance and from the young age of 12 he started performing at hip hop battles, and became a child of the streets, often left homeless and hungry, Spinz found out early how to make money through music by making beats,performing at concerts and other street activities.

Fast forward to present day 2010, Spinz has made a living from his never quit work ethic running his record label, Vibra Music Group, as well as offering children's hip hop workshops where kids can get a hands on experience of what it takes to make hip hop music. 3 solo releases to date, over 50,000 units sold, shows in over 30 different countries and over 1,000 shows under his belt Spinz is a living example of what hard work and determination can bring you in life.

Spinz has been featured on the silver screen also with cameos in movies where his music appears such as "The Job" starring Daryl Hannah and the late Brad Renfro and co-starring in the movie "In Your Eyes" acting alongside Jada Pinkett's brother Caleb Pinkett. For Spinz efforts in 2004 he performed at Harry O's in Park City,Utah during Sundance Film Festival along with N.E.R.D. and others.

Spinz has also shared stages and collaborated with everyone from Styles P,Big Shug of Gangstarr Foundation,MED aka Medaphoar,Georgia Anne Muldrow,Dudley Perkins,Edo Maajka,Frenkie and recently paired up with hip hop producer extraordinare Koolade for there latest 12 inch single "1 In A Million".

Spinz works 365 days a year to bring you all the realness expected from a California hip hop veteran that still serves hip hop from the trenches.

Check out what the real folks say about Spinz...

"If you thought Foreign Exchange was the only collaboration between a states-side emcee and a Euro producer, prepare to be surprised. California's own, Spin, takes care of the flows while Swiss DJ LKB does his job on the beats on their latest collaborative effort Life, Love & The Low End.

"With this collaboration, we learn that the sunny sky of Cali over the snowy Alps of Switzerland is not just a splendid sight, but also an incredible sound."

"There is something positive to be said for minimalism in hip-hop. Its stoic beauty allows the track to evolve through the lyrical ability of the artist(s), and sits as a pocket providing support and freedom. Spinz & DJ LKB have created an excellent homage to simplistic beats with Life, Love, & The Low End, and prove that sometimes less is truly mo' better."

"The fiber of this album revolves around a love of older hip-hop. Spinz, a Oxnard,CA native, illustrates how musics reach can influence anyone with means to receive it, and DJ LKB reinforces this with beats that don't have a ton of backing, ad libs, or superfluous sound effects. It's nothing but the grits n gravy."

"All in all, this is an excellent effort from Spinz & DJ LKB, and makes a solid addition to the linage of global hip-hop and simple construction."

Life, Love and the Low End