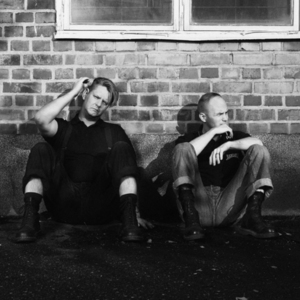 There is at least two artist with name 'spetznas'. 1. Swedish electro-berzerkers Spetsnaz (russian acronym for Special Forces) were formed by Pontus St?lberg and Stefan Nilsson in ?-rebro, Sweden in the autumn of 2001. With the powerful vocals, frenetic pounding bass lines and relentless rhythmic assault, Spetsnaz have the aggression and the melody to be the missing link between the heavy scene and the pop scene.

1. Swedish electro-berzerkers Spetsnaz (russian acronym for Special Forces) were formed by Pontus St?lberg and Stefan Nilsson in ?-rebro, Sweden in the autumn of 2001. With the powerful vocals, frenetic pounding bass lines and relentless rhythmic assault, Spetsnaz have the aggression and the melody to be the missing link between the heavy scene and the pop scene.
Being fans of the electro genre for many years, both Pontus and Stefan felt there was an emptiness in the EBM scene. All the classic bands were replaced by newcomers performing a more technofied style called futurepop, and this new-school didnt exactly excite the boys.
Having performed, both together and separately, in different (more or less serious) projects like Octoberland, Lazer Stefanz, Volvo 242 and PAF, Pontus and Stefan decided to form Spetsnaz and give it 100% of their energy.
Inspired by pioneering acts like DAF, Front 242, Die Krupps and Nitzer Ebb, the duo started to work in studio Downstairs and after a few months, the first four track demo was presented to Swedish labels and promoters. At the same time Spetsnaz launched its official website http://www.spetsnaz.se and interest in the band started to grow.
The duos first album "Grand design" - assisted by bass consultant Jouni Ollila (ex Poupp?e Fabrikk) and mastered by Grammis winner Andreas Tilliander - was released by SubSpace Communications in April 2003, holding twelve tracks of nothing but fresh old-school EBM.
The bands on-stage presence is as intense and energetic as the music with Pontus moving all over the stage, screaming at the top of his lungs, and Stefan fiercely beating his drum pads. The public demand brought Spetsnaz to major cities in Sweden, Norway, Denmark, Germany and even Mexico (twice!).
Spetsnazs broad touring and refreshing music opened the eyes of Out Of Line (home to e.g. Blutengel and Hocico). The German record label re-issued the debut album worldwide in 2004 with an extended tracklisting and an alternative cover art.
The release of Spetsnazs first EP, "Perfect body" (this time made simultaneously by SubSpace Communications and Out Of Line), followed in the fall of 2004 and entered the ..1 spot on the key alternative charts DAC (Germany), FAC (France) and NAC (Sweden).
Almost a year later, the second EP, "Degenerate ones", came out in a numbered digipak edition, limited to only 1.000 units, to present the directions of Spetsnazs second full length album, "Totalit?r" - an immense musical firepower that is bound to take the listener by storm.
Each beat and each note fits tightly in its place, the rhythms lashes out brutally at you and the sequencers seem to be pushing you forward with loud shouts of "Go! Go!".
"Totalit?r" is a fireworks display of high-class aggressive dance music, electronic steamhammers overflowing with emotions, tunes to sweat to... Quite simply, "Totalit?r" is surging with pure energy.

Booking & Information
Out Of Line.

For Generations To Come