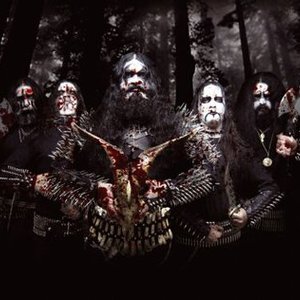 Spellforest is a Black Metal Brazilian band from S?o Paulo, formed in 1995, presenting us with extreme arrogance it's furious and satanic Black Metal. The legion begins to search members for complete formation and pass through many members exchanges, including of its own creator, who lost himself of his initial ideas. In 1998, after Hamon (drums) and Lord Mephyr (vocals and guitars) join the band, Spellforest finally begins to compose and rehearsal.

These two new members would become the central pillar of Spellforest, producing in the same year, alongside with Flagellum (keyboards), the first demo-rehearsal, as the first shows, one in S?o Paulo and other at Goi?nia. In 1999 Flagellum assume one of the guitars instead of keyboards and in 2000 Spellforest releases its second demo-rehearsal. The debut CD ?Adornus Satani? was released in 2001, under the Somber Music label, what had a good international distribution, obtaining respect national and international. In 2002 the band gets rid of the false plague called Grand Duke Ahriman, who was CARRIED by the band with no defined paper on it, only taking profit of the work of the others, and leaning himself on the name that Hamon and Lord Mephyr made so much effort to conquer; so this incompetent was expulsed from the band. In 2003, Daemon Est Deus Inversus (bass), Vlad D'Hades (guitar) e Shammash (guitar) joins Spellforest and make it possible for the band to play at live once again. The third show happened in 2004, at Campos do Jord?o (SP) and prepares to start the recording of the second album, entitled Lucifer Rex, glorifying Satan's presence and the black arts. In 2005 Spellforest executes its last live presentation, at Osasco (SP), making also a daily pay for Lucifer Rex, which is released in September of the same year, with 8 songs. After this, Hamon and Lord Mephyr come back to the studio, for the recording of Lucifer Rex Actum II. Next year (2006), Daemon is invited to get out the band for incompetence in the execution of his instrument, being unable to record it at studio, and making the band gets late with his constant absences. Vlad D' Hades, going in the same path of absences and failures, decides to leave the band, realizing he could be expulsed too. And in 2006 Spellforest signs up a licensing contract of its second opus, entitled LUCIFER REX. It will be distributed in Europe and United States through the Italian label B.T.O.D.
For more information, please, access the official band website: http://www.spellforest.com