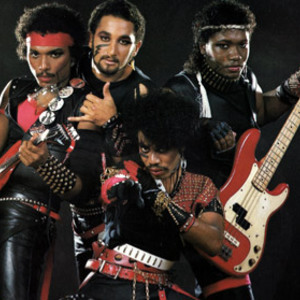 Influenced by Judas Priest and Iron Maiden, among others, Sound Barrier was among the many heavy metal bands active in Los Angeles in the 1980s. The thing that set Sound Barrier apart from other metal bands was the fact that all four of its original members -- lead singer Bernie K., guitarist Spacey T., bassist/singer Stanley E., and drummer Dave "Skavido" Brown -- are black. Rock journalists were intrigued by the fact that four African Americans were playing heavy metal and Sound Barrier enjoyed a fair amount of press in the beginning.

But the band never broke through commercially and only had a small following. Formed in 1980, Sound Barrier signed with MCA two years later and recorded their debut album, Total Control, in 1982. Regrettably, the LP only sold about 12,000 copies and MCA dropped the band. The headbangers' next release came in 1984, when they released the EP Born To Rock on their own Pit Bull label. In 1986, Stanley E. announced that he was leaving Sound Barrier and the band ended up hiring its first white member when Romanian bassist Emil Lech (formerly of the L.A.-based band Teriff) was chosen as Stanley's replacement. With a new interracial lineup in place, Sound Barrier recorded 1986's Speed Of Light for Metal Blade. The album didn't sell and in 1987, Sound Barrier broke up.