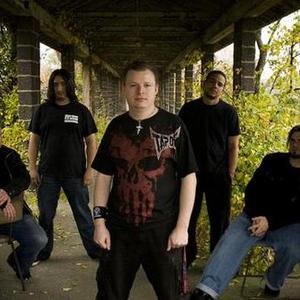 Spawned among the Long Island, NY metal/hardcore scene, Soul Made Visible was born in the Spring of 2002. The band was formed by guitarist Jandro Nazario, who recruited vocalist Bryan Cullen, bassist John McPartland, drummer Dave Kerensky and in late 2008 guitarist Andrew Danesi was added to complete the lineup. The group fuses a blend of fierce rhythms, brutal riffs, punishing breakdowns and primal screams coupled with melodic segues and driving anthemic hooks.

The group fuses a blend of fierce rhythms, brutal riffs, punishing breakdowns and primal screams coupled with melodic segues and driving anthemic hooks. This dichotomy within their sound has gained them fans across the metal, hardcore and alternative scenes as well as the ability to bring both sexes together in the pit.

In the Spring of 2003, SMV recorded the "Broken Not Shattered" EP. Independently released, tracks from the CD were handed out at live shows and distributed throughout New York. This, married with a tight and energetic stage show began building the band's fan base and sparked interest from several independent record labels. In late 2005, the band teamed with Max Illidge and Joe D'Amico of 40 Below Summer and Black Market Hero to record a self-titled EP which has received local, college and internet radio play and expanded their fan base even further.

Soul Made Visible have performed for local rock radio showcases including WBAB's Homegrown Talent Showcase, played at the 2004 CMJ Music Festival in NYC, the 2005 Jagermeister Tour in Philadelphia and Ohio's 2007 Independence Fest.

2009 promises to quicken the band's exponential rise, as they have kicked off the year by signing a deal with independent label MEI Records, and continue to assault venues accross the nation in support of their first full-length cd "Innocence Lost". The group writes at a feverish pace, often showcasing new material at several live shows in a row, continuing to refine and structure their sound into the brutal lullaby it has become.