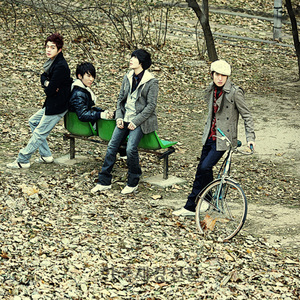 A korean pop band named Someday. Formed in 2007 and at the same time signing an exclusive contract with South Korea's Doremi Media, they churned out ?Can I Love Again' and ?Confession' among other hit tracks as part of popular group ?4MEN.' As ?4MEN,' the members Jung Se Young and Han Hyun Hee debuted in 2005 with the album, ?The Immortality Of Soul' and were recognized for their musical talent and became well-known in the Korean R&B scene and now they've formed a new team as ?Someday.'

While previously active in ?4MEN,' Jung Se Young and Han Hyun Hee were recognized for their singing ability and their ability to create lyrics that would touch the hearts of people, and now with their birth, ?Someday' is highly anticipated as the first super male vocal group.

This time ?Someday' will participate in it's soundtrack and sing ?Do You Know?(Boys Over Flowers Version)? as F4's ballad theme track which will be used as background music in the drama.

-
Someday is also pop-trio from Osnabr?ck, Germany. They are loocking forward to release their first Album in 2006.

The other artist (pictured), SomeDay, is a four-piece post hardcore act from Burnham-On-Sea, UK. They have released a number of EPs in the 5/6 years they have been together. Their most recent release is a new 5-track CD entitled "There Are No Heroes".