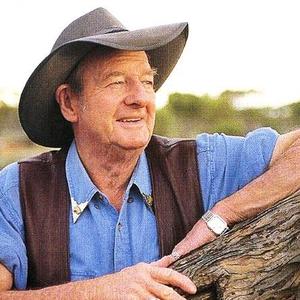 David Gordon "Slim Dusty " Kirkpatrick AO, MBE (13 June 1927?19 September 2003) was an Australian country music singer-songwriter and producer, with a career spanning nearly eight decades. He was known to record songs in the legacy of Australian poets Henry Lawson and Banjo Patterson that represented the Australian Bush Lifestyle, and also for his many trucking songs. Dusty was the first Australian to have a No. 1 Hit song with Gordon Parsons (Pub With No Beer).

He received an unequaled 37 Golden Guitar and two ARIA awards and was inducted into the ARIA Hall of Fame and the Country Music Roll of Renown. At the time of his death at the age of 76, Dusty had been working on his 106th album for EMI Records. In 2007 his domestic record sales in Australia surpassed seven million.

Over the course of his career, he collected more gold and platinum albums than any other Australian artist.
Dusty not only recorded songs written by himself and other fellow Australian performers, but also recorded classic Australian poems by Henry Lawson and Banjo Paterson with new tunes, to call attention to the old 'Bush Ballads.' An example is The Man from Snowy River by Paterson.

In 1970, he was made a Member of the Order of the British Empire for services to music. In 1971 he won Best Single at the Australian Country Music Awards at the Tamworth Country Music Festival (Slim's wife Joy McKean won Song of the Year as writer of the song for which he won best single). In all, he won a record 35 "Golden Guitars" over the years.

He died at home in St Ives, New South Wales on 19 September 2003 after a protracted battle with cancer, at age 76.

The Slim Dusty Story started back in the 1940s on a remote dairy farm in the hills behind Kempsey, NSW, when a 10-year-old boy dreamed of being a country music singer. His name was David Gordon Kirkpatrick... he called himself "Slim Dusty" and began to live that dream.

But even the most optimistic farm boy would never have imagined the life that was to unfold... a life that would establish Slim as the voice of the nation, the chronicler of Australian history in song.

Slim managed to hold on to those early visions of writing and singing about the bush because during his lengthy career, he always stayed in touch with his audience. And he did this in a very real and meaningful way, so much so that his fans would feel that Slim was one of their mates and his songs "just a good yarn you might hear from a mate at the pub, around a campfire in the bush or at a back yard barbie".

He described his music as "songs about real Australians... "I have to be fair dinkum with my audience. I can't see any other way of doing it," he said. "You have to believe in what you are singing about."

Slim Dusty was the first Australian to have a number one hit record and the only Australian to ever receive a 78rpm Gold Record (for A Pub With No Beer in 1958)...

He was the first Australian to have an international record hit and the first singer in the world to have his voice beamed to earth from space (astronauts Bob Crippen and John Young played Slim's recording of Waltzing Matilda from the space shuttle "Columbia" as it passed over Australia back in 1983).

During an amazingly successful career spanning over six decades, Slims' continued popularity saw him rewarded with more Gold and Platinum Awards for sales of his singles, eight-tracks, cassettes, CD's, videos and DVDs... more than any other Australian artist!

Slim was recognized for his long time services to Australian entertainment with an MBE and an Order of Australia. In 1999, Prime Minister John Howard named Slim Dusty Australia's Father of the Year and Senior Australian of the Year. There were many other awards and honors... too many to name here!

Dusty died at his home in St Ives, New South Wales on 19 September 2003 at the age of 76, after a protracted battle with cancer.