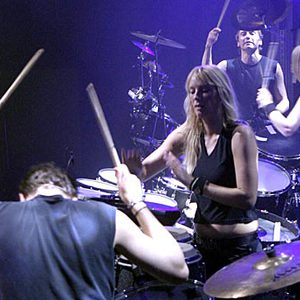 The most original band of the Netherlands. You never before heard or seen drums like these. Acoustic power with harmonious arrangements. Self-willed and swinging, overwhelming and spectacular. The coloured compositions, written by the founders and leader artists of the band Mies and Willem van Kruijsdijk, are collected in more than 10 albums and performed live by four drummers and one multi-instrumentalist: Gijsbert Zwart, Clara de Mik, Boudine van Slobbe, Johan Boere and Robin van Vliet.

Why shouldn't the drums have the leading role in a band? With this question, Mies Wilbrink and Willem van Kruijsdijk began in 1982 ?Slagerij van Kampen?: a pop group that plays only with percussion instruments. Their involvement with the world is translated into ethnic characteristic original compositions. That the drums, the most universal and probably the oldest instrument after the human voice, have to play the leading role is repeatedly proved. And if you do not recognize the group's name, you have to check the book collection of TinTin.

During more than 25 years, the Slagerij van Kampen concept has grown into a phenomenon of which the Netherlands can be proud. It has grown into a role model for other percussion groups and with more than 100 concerts per year into one of the most performing bands. A few highlights from a long range of achievements (look for this purpose also the chapter Slagerij in the past): sold-out concerts everywhere, an Edison and a gold disc. Without all the media hypes, Slagerij van Kampen knew how to reach the big public, keeping the attention and furthermore developing itself. A remarkable success for a band with such a self-willed music.

You have to experience Slagerij van Kampen ?live?: hear, watch and also above all feel it. The live-albums are a faithful reproduction of what happens to you during a show: cool music with a big modern power of expression, an awesome drum power! The only thing that you can miss by listening to the disc is the fantastic lightshow and the visual presence ? the splashing sweat ? of the players. But also the normal CD's, with their futuristic approach of the instruments' set, are in their self-willed way very fascinating. For everyone who really wants to have something original.

Spit In The Storm

add up to the actual size

A Long Walk On A Short Pier