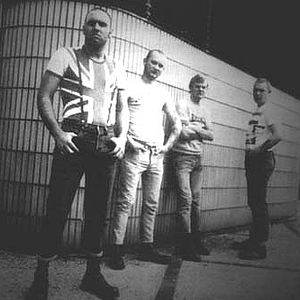 Skrewdriver was originally an Oi! band that upon their second release took a turn into nationalist white power skinhead centered music ? They formed in Poulton-le-Fylde, England in 1976 by Ian Stuart Donaldson. They became one of the first neo-nazi rock bands, playing a leading role in the far right rock against communism movement. Ian Stuart Donaldson, formerly of the Rolling Stones cover band Tumbling Dice, formed Skrewdriver after seeing the Sex Pistols in Manchester. Skrewdriver at first had a punk appearance, but they changed their image into a skinhead look in 1977.

Ian Stuart Donaldson, formerly of the Rolling Stones cover band Tumbling Dice, formed Skrewdriver after seeing the Sex Pistols in Manchester. Skrewdriver at first had a punk appearance, but they changed their image into a skinhead look in 1977. They also temporarily had a rocker/biker look, around the time they released the EP Built Up Knocked Down. In 1978, Donaldson moved to Salford, where he recruited guitarist Glenn Jones and drummer Martin Smith. This lineup toured extensively, but certain venues were reluctant to book the band because of their reputation as a violent skinhead band. Performing largely for a skinhead audience, the first versions of the band released one album and two singles on the Chiswick label. This version of the band split up in January 1979 after a concert in Warrington, but Donaldson resurrected the name Skrewdriver in 1982 using new musicians.

Band Musicians
Skrewdriver inherited its first line-up from it's predecessor, the band Tumbling Dice, which Donaldson had formed in 1975. They were Ian Stuart Donaldson, Kev McKay, John Grinton and Phil Walmsley. When the band changed from punk to skinhead, Walmsley bowed out and was substituted with skinhead Ron Hartley. By 1978 the band disbanded. Both moving to Salford's Cheetham Hill, McKay and Donaldson reformed the band in 1979 with local Manchester talents Glenn Jones and Martin Smith. Skrewdriver became a regular act at the mayflower club in Belle Vue and toured local gig venues around Greater Manchester. The band was to be short-lived and after an ill-fated concert in Warrington the band fell apart again, in 1980. This time Donaldson left all the others behind and moved on his own down to London. By 1981 Skrewdriver had reformed for the 3rd time, still with Ian Stuart Donaldson of course, new additions were Mark Neeson, Mark French and Geoff Williams, French and Williams had previously played with The Elite. It was this line-up that released the 12? EP Back With A Bang on Last Resort Records in 1982. External pressure on the band took its toll and by 1984 all three had left the band and Donaldson recruited Mark Sutherland, Adam Douglas and Murray Holmes. Holmes, an Australian, had previously played with the band Quick And The Dead. Skrewdriver soon released their LP Invasion on the newly-signed West German label Rock-o-Rama Records, which would stay faithful to the band until the tragic end. The line-up is strengthened with Steve Roda the following year. By 1987 the line-up is described on artwork as Ian Stuart (Donaldson), Mark Sutherland, Martin Cross, Ross McGarry, Merv Shields, and John Burnley who was the brother of No Remorse's Paul Burnley. Steve Calladine, better known as Stigger joined Skrewdriver in late 1987. (Donaldson launched a solo career as Ian Stuart with the release of Ian Stuart Solo backed by Strikeforce which essentially was the remaining band, Skrewdriver as a band continued however in paralell with Donaldson's solo career.) In 1990 the long line-up was added to with John Hickson.

On 24th of September 1993, Ian Stuart Donaldson died from the injuries sustined in a car-crash the previous evening and with him the band Skrewdriver ceased. Since then, countless benefit and remembrance gigs has been played in his and the band's honour, with virtually every nationalist band worth their salt, producing a Skrewdriver cover.