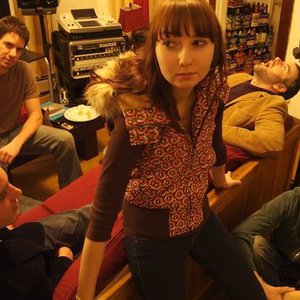 Skittish-Voluptuous was formed in March 2006 by Gabriel Cruser and Brian Redmond when the two friends discussed how the modern art of remixing had evolved and how that could be incorporated back into the original song writing process. What if they wrote acoustic pop songs and immediately remixed them electronically? Gabriel took his acoustic guitar and wrote and recorded the vocals and music for the first skittish song.

Brian followed this up by scrapping the guitar track and banging away on synths and samplers to produce the new music around the recorded vocal. And that's how the framework was born.

Six months later, the duo put the word out and posted to Craigslist in search of a vocalist. Many replies were carefully filtered down to five auditions. Within minutes of Caitlin walking out the door, Gabriel and Brian agreed they had found the one.

After many more months writing and recording, they began work on the live arrangement. Brandon and Mike were asked to join the group full time to fill out the set of loosely defined roles: Caitlin on vocals, Gabriel and Mike on percussion, Brian on electronics and Brandon on bass.