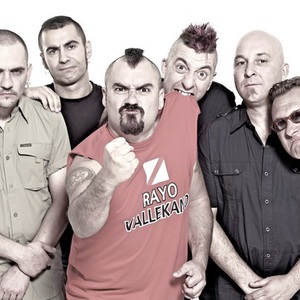 Ska-P is a Spanish ska punk group formed in Vallecas (a neighborhood of Madrid, Spain) in 1994. Most of their songs feature an infectious and energic vibe and feature lyrics about non-conformity, criticism of capitalism and racism, and their defense of equal justice, plus taking part in various multicultural, alternative and anti-globalization festivals. Their song "Cannabis", supporting and defending the legalization of said substance, launched them to certain popularity in Spain and parts of Mexico and South America.

They also have followers in the UK, The Netherlands, Belgium, Italy, Switzerland, France, Germany, Portugal, and other European countries.

After a wildly successful tour across South America in late 2005, the band decided, in their own words, to "stop for a while". Some of their members went on to form side band projects such as No Relax and The Locos. As time went by without further notices, many Ska-P fans feared the band had been gone for good. On late April 2008 and for the rejoice of their worldwide fans, they announced their return as a band on their official site.

Their new album, "L?grimas y gozos", was released the 7th of October 2008 and its first single is called "Crimen sollicitationis". The band is going to perform various shows around South America and Europe in November and December.