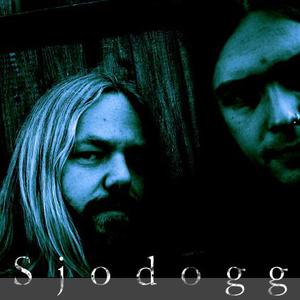 The basic concept behind SJODOGG is to create dark music with an emphasis on atmosphere and groove, rather than focusing on sheer technical brutality. The music of SJODOGG is minimalistic in some aspects, yet innovative and compelling. We believe that SJODOGG has something significant to offer the fans of dark metal music around the world- the "edge" that separates us from many of our contemporaries. Sjodogg consists of members from Enthrall, Crest of Darkness, The Legion and Paradigma.

According to an interview with Espen on Vampire Magazine: The band was founded by myself and Kjetil back in '03. Before that we had played together in The Flesh and Enthral since '96. Sjodogg is based on an acoustic solo-project I worked on for a few years, trying to combine atmospheric sound-effects with black-metal riffs. The project toppled over eventually, giving birth to the idea of a new and heavier Sjodogg, a return to electric guitars and blast-beats! As soon as Enthral were done with 'Subterranean Movement' in the studio in the spring of '03 Sjodogg had its first rehearsal. 'Demo Anno 2004' was finished during the following summer with the tracks 'Through the Cataracts of the Dead', 'Of Jaundice and Malaise' and 'Malediction of Erebus'. A year later 'Demo Anno 2005' was recorded in the same studio with the same engineer, Stian Aarstad who is a friend of ours, including the tracks 'The Asphyxiation', 'Sentinels of Severed Flesh', 'Elegy to the Brethren of the Weeping Corpses' and 'A Song of Plague'.

Landscapes Of Disease And Decadence