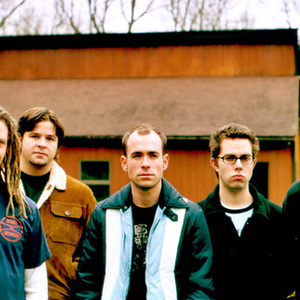 It's no surprise that four bored suburban kids might decide to start a band in high school, maybe play a few "gigs", maybe even stick together for a few years and try to make it in the "big city." This may sum up how Sinch began in vocalist Jamie Stem's parents' garage circa 1994. But, their collective desire to create new sounds and incorporate technology into their music and performance has brought them to a greater path. Despite hitting myriad roadblocks along the way, Sinch has remained completely intact since 1994, dedicated to their pursuit.

Sinch consists of five core members that come together to create, to construct, and deconstruct the art in their surroundings. Using guitarist Tony Lannutti's ominous guitar tones and singer Stem's ability to switch, with ease, from soft, passionate melodies into taut unnatural screams, the band steadily creeps its way into explosions. The intensity of emotions erupts through the group's collective pores. With Mike Abramson's driving bass lines and Dan McFarland's intricate drumming providing both the engine and fuel, there is just something special about this band that you can't quite put your finger on, and maybe don't want to.

Anchored in the Philadelphia suburbs, Sinch's popularity has grown year after year. With the March 22, 2005 release of Clearing The Channel on Rock Ridge Music, the band continues on its journey and takes the next giant leap. The 11-track album is replete with haunting melodies, lashing riffs, and slicing lyrics; it's a shining example of modern hard rock. Co-produced by Sinch and Drew Mazurek (Linkin Park, Nothingface, Dog Fashion Disco), Clearing The Channel features such tunes as "Silence Broken," "Dead Sentinels," and "Hydroplane," showcasing the band's passion, talent, and commitment to using technology to enhance the musical experience.

The undeniable proof of this facet of the band's arsenal is Jay Smith, the fifth member of Sinch. In order to add a visual element to the performance, Smith invented and patented the Viditar, a full-on editing console contained in a device that looks much like a Lucite guitar. Onstage, armed with this "ocular noise machine" and a hard drive full of CNN footage and odd visual loops (like Osama Bin Laden morphing into Jesus morphing into Hillary Clinton), Smith edits and cuts at breakneck speed on stage, playing alongside the musicians, sweating out each and every drop of video brilliance. His contribution is essential, creating palpable connections between the images, the lyrics, and the sound. The full multi-media spectacle is the true Sinch experience.

By taking chances mixed with equal doses of innovation, the Sinch boys have since been dubbed the "brothers of invention" by Philadelphia Weekly and continue to evolve their already intriguing live show with each and every performance. For tour dates and more information, visit www.sinch.net.