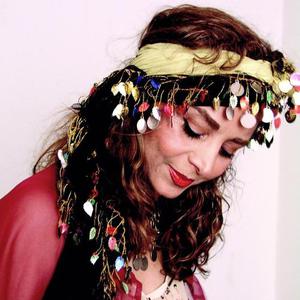 Born in Khorasan, in the heart of a popular tradition, Sima Bina (Persian: ???? ????) started her career on Iranian radio at the age of nine, under the direction of her father, Ahmad Bina ? a master of Iranian classical music and poet who wrote many of her early songs. She studied the repertoire of learned music ?radif? and singing technique with great masters such as Maaroufi and Zarrin Panjeh.

She studied the repertoire of learned music ?radif? and singing technique with great masters such as Maaroufi and Zarrin Panjeh. She went on to acquire her own solo programme, Golhaye Sahraii (Flowers of the Desert), presenting a collection of folk songs and music from various regions of Iran, which is still remembered today.
After graduating from Tehran University in 1969, majoring in Fine Arts, Sima Bina contniued and perfected her knowledge of radif with the highly subtle teaching of great Master Davami.

Since 1979, along with teaching Iranian classical music and vocality to selected students, Sima Bina has focused on doing further research on Persian folk songs, collecting, recording, writing and re-interpreting popular regional music, especially from Khorasan, her native land. By travelling to most remote places all over Khorasan, Sima has been able to gather and revive a collection of almost forgotten songs and melodies. She has thus gained a unique position in the history of Persian music.

Since 1993, Sima Bina has been invited to present her collection of Persian folk songs in festivals all over the world, including ?97 V?rlden I Norden in Norway, ?99 WDR Weltmusik Festival in Bonn/Germany, and the forthcoming Raza Festival on Khorasan Music in the Netherlands. Furthermore she was invited to perform on ?emociona!!! Mujer? in Spain in 2001, then also in Cologne/Germany on the ?World Music Night? and also on a Festival in Antwerpen/Netherlands in the ?Culturen Centrum?. And many many more.

Due to her devotion and dedication to the Iranian folk music, Sima Bina can now see the materialization of thirty years of meticulous work by making her music known worldwide.

The Song Of The Ney CD2

The Song Of The Ney CD1