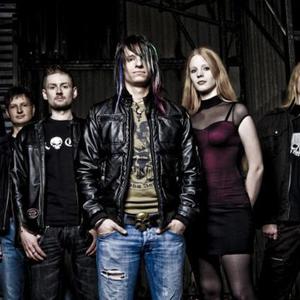 SILVERLANE - that's the name of the band which sees Subway To Sally drummer Simon Michael live out his penchant for partially progressive, but always melodic and symphonically inclined power metal in the tradition of Edguy, Avantasia, Kamelot and Gamma Ray. Back in 1995, the then 11-year-old formed the band together with his brother Chris (guitar, backing vocals), sister Dodo (keyboards, backing vocals) and school friend, Daniel Saffer (bass) - more or less as a family business, gathering initial experience in composing songs as a joint venture.

This experience was soon to pay off: in the middle of working on his self-composed journeyman's piece, LEGENDS OF SAFAR (2005) - a concept album which he distributed himself, selling 1,000 copies without promotion - the drummer applied for a position with Germany's medieval rock music institution, Subway To Sally. The band were so impressed with the amazing skills of the talented young drummer that they made him a sensational offer: "Let us know by tomorrow morning, ten o' clock, whether you want to join us!" The rest is rock history, at least as far as Simon Michael's work with the band from Potsdam is concerned. This, however, didn't automatically mean the end of SILVERLANE. In fact, the opposite was the case: together with Ecki Singer, a 23-year-old, strong-voiced powerhouse of a vocalist, and guitarist Uli Holzermer, Michael has been working simultaneously on his band's official album debut "My Inner Demon", due out on 20 February 2009.

"The various styles in heavy metal - be it medieval folk, hard rock or power metal of the variety that SILVERLANE specialise in - aren't as different as some people may think," reckons the percussionist, explaining how he succeeds not only in working in two acts alongside each other without no effort, but also in combining two seemingly contrary genres without the slightest loss of friction. The answer is simple: "Good melodies with an equally good accompaniment - it works every time!"

In line with this, SILVERLANE allow themselves to be inspired by "all kinds of genres from the easy listening and e-music sectors": be it classical music, movie soundtracks, singer/songwriter creations by artists such as the Palestinian vocalist Rim Banna or - to remain in the realm of drumming - oriental percussions: anything goes - nothing is impossible.