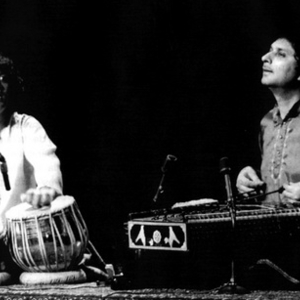 Shivkumar Sharma, the great santur virtuoso, weighs every note he plays with infinitesimal care. The santur is known to us in Europe as the cimbalon. As if free of gravity's fetters, Sharma hovers over the hundred strings of his instrument to create sounds of dazzling beauty, ranging from meditative calm to complex, percussive whirlwind passages. He is accompanied by India's legendary tabla player, Zakir Hussain. Hussain achieved renown as a classical artist at an early age.

In later years he went on to experiment with many other musical genres including famed jam sessions with many jazz and rock stars.

Before Shivkumar Sharma, no one considered it possible to perform classical music on the santur. His sensitive and virtuoso playing has all but dispelled this hollow notion. To date, however, no one has emerged to rival Sharma ? for the instrument was long known only in folk music.