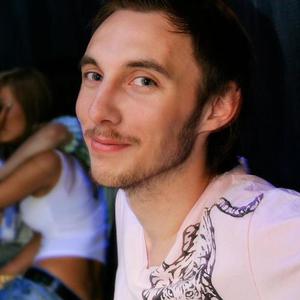 At age 17, he developed his mixing knowledge under two projects: Pulse, his solo project; and The Offbeats together with his Moscow friend and amateur producer Sergey Burtsev. During this period, Alex composed two albums of trance and chill-out music lush with rich piano melodies and stunning pads, but he wasn't satisfied with quality of his tracks. With the "Morning" track Alex reached 1st place in top 20 of sectionz.com website.

In the beginning of year 2006 Alex focused on refining his style to produce better quality tracks. The new and first finished track from Shifted Reality - "Fever", was created in 7 days, and has a unique modern sound in it. Inspired by Above & Beyond, Markus Schulz and Andy Moor, Alex produced a track with a very emotional and uplifting bassline, groovy percussions with tons of effects and a sophisticated trance melody. The track was noticed by Andre Tanneberger (ATB) and Alex was lucky to appear on his new compilation called "The Dj In The Mix 3". The track was also played on different radio stations and got support from many DJs, such as Adam White & Andy Moor.

The next track with famous vocalist Tiff Lacey was called "On This Day" and due to its commercial sound had a great success. It had a large support from famous producer and DJs like Miika Kuisma, Pedro Del Mar, ATB, Neoblizz and others. After that Shifted Reality produced a few tracks in his renovated style characterized with the same progressive trance sound combined with vocal shouts and cuts. His track "Summer Dawn" got a huge support from different DJs. Above & Beyond played this track in their TATW radio show and Kenneth Thomas announced it as the best track of the month in his radio show. Paul Oakenfold also supported it in his Perfecto Tour episode after it was released.

In summer Alex did a few remixes on such projects as Neoblizz, LCM!, Sebastian Davidson and .:maxi:. to get his name known and some of them came out on different labels. The last one on .:maxi:. feat. Tiff Lacey got support from Andy Moor, Galen Behr, Niklas Harding, Mike Shivers, Armin van Buuren and Paul Vinitsky.

Today Alex tracks are supported all around the world by different DJs like Tiesto, Ferry Corsten, Markus Schulz, Above & Beyond, ATB, Niklas Harding, Galen Behr (Passiva), Pedro Del Mar, Andy Moor, Paul Oakenfold, Mike Shivers, Bobina, Miika Kuisma, Kenneth Thomas and appeared many times in such radio shows as ?Global DJ Broadcast? with Markus Schulz, ?Trance Around The World? with Above & Beyond, "Countdown" with Ferry Corsten, "Club Noveau" with Tiesto, ?Nocturnal Show? with Matt Darey, etc. Shifted Reality tracks and remixes were released on such labels as Kontor, Emotive Sounds, Moonrising Records, Impressive Records, Bonzai, Active Recordings, Alter Ego Records, Subtraxx Recordings, Tranceportation, Abstraction Records. In addition to this Alex is working on different projects that cover different styles with famous producers like Santerna & Peter Safranoys. Also Alex is getting involved into DJing and he is doing guestmixes for famous DJs and producers.