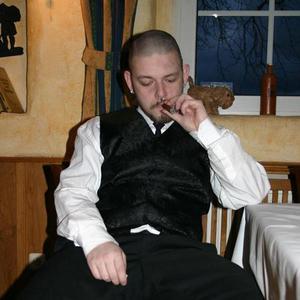 Shava Sadhana is a sanskrit term meaning meditation on a dead body. The meditating person sits down on a fresh corpse on the cremation ground and calls for the mother Smashan Kali who dwells there with immaterial spirits, so that she can possess the dead body and get in contact with the meditating person. Vingthorr, the creator of the project Shava Sadhana, travelled to Calcutta many times on his numerous journeys to India.

Calcutta, the centre of the Kali-cult, has fascinated him since childhood and he regards himself a servant of Mother Kali Ma. He also travelled to Iceland several times and while studying Icelandic and Scandinavian culture he developed an intimate bond to the old nordic Gods. Shava Sadhana is exclusively ritualistic, worshipping both Kali Ma with secret mantras and the Germanic Wotan/Odin. Different occult tenets, especially those of Aleister Crowley, are also woven into his work. Another stimulus for creativity are the journeys that the artist Vingthorr makes by means of different psychedelic, mostly unknown substances, which were investigated by Alexander Shulgin. Different symbolism of runeology and old hinduistic rituals are merged into an individual occult Shava Sadhana philosophy. After some early demo releases, which were only made available to friends, the first regular Shava Sadhana Album Andask was released by the label Licht von Thule. Andask represents a compilation of songs, which were composed in the last few years. Furthermore, an exclusive remix of the song Hel was included on the NeoForm I online-sampler which can be downloaded for free at: www.neo-form.de