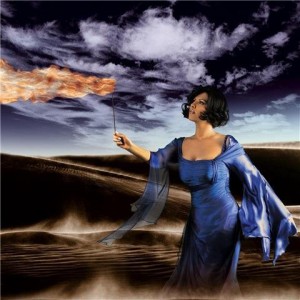 Shams can refer at least to one of following seven artists/groups: 1. a female vocalist from Kuwait 2. a folk and art music ensemble from Afghanistan 3. a Kurdish ensemble from Persia 4. a Persian Singer of 1950s 5. a female pop band from U.S.A. 6. a garage rock band from U.S.A. 7. an indie artist from U.S.A. 1. Shams - a vocalist from Kuwait. She is best known for her Khaliji dialect songs, but has made a successful crossover to Egyptian pop songs as well. Shams is often noted for her daring and youthful approach to the more traditional Khaliji genre.

1. Shams - a vocalist from Kuwait. She is best known for her Khaliji dialect songs, but has made a successful crossover to Egyptian pop songs as well. Shams is often noted for her daring and youthful approach to the more traditional Khaliji genre. She has recently become famous for her satirical, sometimes politically-motivated, music videos as well.Her last album was the self-titled Shams, which was a departure from her previous Mudhahara Nesa'iya. Her 2010 album is expected soon.

2. Shams - an ensemble which plays folk and semi-classical music of Afghanistan, directed by Raonaq Massoud. The album's title, Flowers of Exile, refers to the Afghani diaspora forced by Russian and U.S. invasions, the ravages of war, and internal Taliban persecution. (Stories exist of musicians in Afghanistan hiding or burying their instruments to keep them from being confiscated or destroyed by the Taliban.) Situated in the middle of central Asia as it is, it stands to reason that Afghanistan would absorb sounds from the cultures surrounding it. Persian poetry and the influence of the rag and tala systems and instrumentation of Northern India are in evidence here, mixed in with the amalgam of Afghani indigenous cultures. The resulting sound is rich, yet with a filigreed delicacy. Robab, harmonium, tabla, dholak, flute, and saxophone come together to create a sound that relies more on contrast than blend for its appeal. There is a refreshing lack of pretense and flash on this release. The voices are frank and open and the playing serves the melody, not vice versa. Unfortunately, the English translation in the liner notes is full of fractured grammar, necessitating multiple readings to get the gist of what Pierre Fassy and Massoud Raonaq have written. There's a lot of good information here; it's just difficult to get at. But this is a minor drawback to a promising debut.
-> http://www.rootsworld.com/reviews/shamexil.shtml
-> http://www.cmtra.org/spip.php?article340

3. Shams - a musical group that performs traditional Sufi, Kurdish folk and classical Iranian music with the tanboor, Daf (frame drum), Ney and various other percussion instruments. The group was founded by composer Kaykhosro Pournazeri. Pournazeri formed the Shams Ensemble with a vision of bringing back the lost art of tanboor through compositions that fused the tanboor with other traditional classical mode instruments. He invited fellow musicians who were familiar playing such classical pieces, they eventually became a popular musical in Iran.[4] Initially, the group performed under the name of Tanboor-e-Shams, but adding traditional and Kurdish music to their performances, they took the name of the Shams Ensemble. The Shams Ensemble has performed at over 300 international venues and was on tour in the United States in 2008 during the month of October. Over the years, there have been more than fifty players and singers, the majority of whom were Pournazeri's students. After the 1979 Islamic Revolution in Iran, women were banned from performing solo in front of men?that includes singing or playing any instruments. Only recently, women have been included as vocalists and players of the tanbour. Currently, the Shams Ensemble has 15 players. www.shamsensemble.com

5. Shams or The Shams - that's a female band from New York, formed by Amy Rigby (vocals, guitar); Sue Garner (vocals, bass); Amanda Uprichard (vocals). - Additional personnel: Lenny Kaye, Robert Quine (electric guitar); Will Rigby (drums).
There's something decidedly postmodern about the Shams' approach to music, which combines girl group '60s pop with off-kilter jangliness and a sort of country twang. The majority of Quilt runs through these constructions with an intelligently guileless attitude that's rather endearing, but many tracks, like "Dark Angel," move it into mature and emotive territory that lends the album a good deal of depth.

6. Shams or The Shams or Thee Shams - a garage rock band from U.S.A. formed by Andrew Gabbard (vocals, guitar, electric piano, Hammond b-3 organ); Zachary Gabard (vocals, guitar); Keith Fox (harmonica, drums); Chad Hardwick (bass guitar). - Additional personnel: Daniel Karlish (lap steel guitar); Max Bender (harmonica); Brandon Lewis (trumpet).
From the cheesy homemade porn of the cover shot to the Farfisa-led garage rock opener, "On My Mind," the debut album by Cincinnati's Thee Shams is erstwhile blues label Fat Possum's attempt to jump on the sleazier side of the garage rock bandwagon. That's not to say that this mix of Memphis R&B and '60s-style garage grunge isn't effective -- the version of Bob Dylan's "If You Gotta Go, Go Now" sounds like it was cut by the circa-1964 Rolling Stones during their sojourn at the Chess studios, and that's a compliment -- just that listening to this album elicits a fun game of "Name That Influence" but not much else. The lyrics are pure Nuggets snot-rock trash, complete with casual misogyny and comically inappropriate tough-guy posturing coming from a guy (Zachary Gabbard) who quite often sings like his jeans are far too tight, and the tunes are equally pleasant but derivative. Please Yourself is a fun soundtrack for a night of mild barroom debauchery, but not much more than that.

7. Shams - Indie music making artist from Richmond, Virginia
United States (it could be this played at 160bpm backwards) listen to his music: www.myspace.com/shamsnoxqsz

The Evolution of Creation