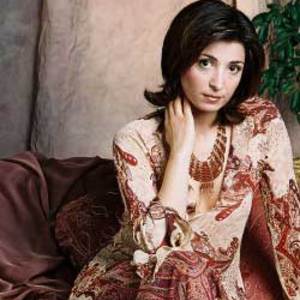 My name is Shahrzad. My parents, both poets, named me after Scheherazade the story-teller from One Thousand and One Nights. I was born in Tehran and left my homeland when I was about 12 years old. I am part of the Iranian generation that has experienced living through a revolution, war and repression and my music sometimes reflects these experiences. But I was also one of the lucky ones who had the chance to live in places where I could express myself, enjoy life and be free. I appreciate music of every genre and I particularly enjoy world music with a twist of Jazz.

Although in the 80's I was a big fan of popular singers who dominated the charts, now in my 30's I tend to appreciate music with more meaning and substance: Music that is soothing and uplifting and at the same time has a message and a story to tell. In other words, music that may not be mainstream. I began singing at an early age and got more serious when I was in high school. Later on, while studying Sociology at UCLA, I took every opportunity to take part in plays, music performances and dance classes. Then in my early 20's I began to sing professionally with an all-girl pop band called Silhouette and realized that I felt truly alive while recording in the studio and performing live. After that, when the band broke up, I started my solo career and sang about everything that was important to me: Iran, my memories, love, life and everything in between. A few years has passed since the release of my last album but now with the release of my third solo album geared towards an international audience and work on a fourth album set to be released in 2010, I am making up for lost time. I am motivated by all my dear fans from Iran, Europe, America and other places who encourage me to keep singing. I thank them with all my heart.Love and Peace to all.