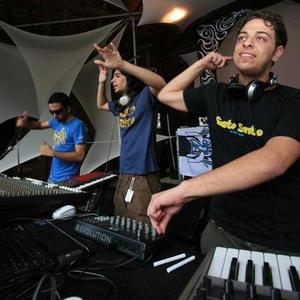 Sesto Sento are Matan Kadosh, Aviram Saharai, and Itai Spector, a psychedelic trance project from Israel. Matan started his trance era at the age of 15, he started to collect music and a year later he started DJing in underground parties. Aviram discovered trance at age of 14, a year later he begun producing music for fun. Itai has been making music since the age of 14, and it was Aviram who got him into trance music.

Matan started his trance era at the age of 15, he started to collect music and a year later he started DJing in underground parties. Aviram discovered trance at age of 14, a year later he begun producing music for fun. Itai has been making music since the age of 14, and it was Aviram who got him into trance music. One day the three of them gathered together and made their first track ever, Soap Bubbles. Since then they started to work on music more seriously, concentrating both on full on as Sesto Sento and the more techno-ish direction as Ferbi Boys.

They compiled the BPM & BPM2 compilations for Agitato and released in SST the Sesto Sento EP. In October 2002 they released their debut The Inner Light through Com.pact, and their second album The Bright Side followed at November 2003. As Ferbi Boys they released the Ferbi Boys EP through Hadshot Hahizar in November 2002. All that between excessive traveling and playing at parties in Israel and around the world.

Key to the Universe info:
The spectacular trio, Sesto Sento are back with full force, presenting their forth featured studio album release, Key To The Universe.
Sesto Sento are Matan Kadosh, Itai Spector and Aviram Saharai, all from the city of Afula, located in the peaceful northern parts of Israel.
Sesto Sento is considered as one of the Top electronic music producers roaming planet earth.
Their innovative & intelligent sound has captured the hearts of thousands of fans from all corners of the earth.
Sesto Sento's discography is highly impressive and includes numerous tracks released in compilation by Top international labels. It also includes 3 blasting & successful studio albums (The Inner Light 2002, The Bright Light 2003, Come Together 2006), "Remixed" Album (Sesto Sento Remixer 2005, including exclusive Remixes made by GMS, Protoculture, Pop Stream, Aquatica, Visual Contact, CPU, Sillicon Sound, & Apocalypse), & 3 Compilations selected by Sesto Sento, Afula On Vol.1 (2004), Afula On Vol.2 (2008), BPM Vol.2 (2003).
Their previous album "Come Together", has sold a record number of copies, awarded the group with a Gold Record.
Ever since they have been touring the globe extensively, practically on a daily basis, placing them on the most demanding stages around the world.
Sesto Sento are one of the most identified groups, presenting a new breeze of change, always surprising with their fresh and brilliants ideas.
As we have come accustom to, the magnifying, Sesto Sento, trademarked sound is always developed and upgraded, stretching their artistic & technological advances to the max.
"Key To The Universe", marks yet another huge upgrade in ideas & sound, featuring 9 massive, previously unreleased hits, including an astonishing Cover to Moby's ? "Lift Me Up" track, and a wonderful remix to Sub6 & Pixel track "Teder Beseder".
Sesto Sento's live act show, is a true work of art, and has been blasting & lifting dance floors across the universe for years now, their current live shows marks another upgrade, including an ingenious use of Vocoders & one of Israel's most recognizable & talented guitar player, Dror Elkayam, who has been touring with the group for the past 12 months.

Key To The Universe, opens up the doors to heaven, and is set to take the electronic music world by storm.

I Love My Weed (CDS)

Somebody I Used To P.L.U.R (Sesto Sento Mashup) (CDS)

What Are You Waiting For

Key To The Universe