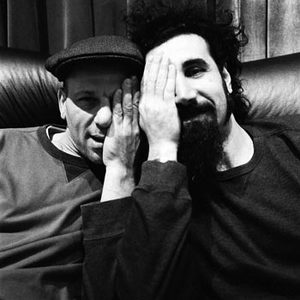 Produced by Serj and Arto, Serart was the first release on Serj's own Serjical Strike Records, a label seeking to offer a home for bold, new original music. An eclectic array of textured tracks, Serart mixes Middle Eastern melodies with Pan-African rhythms while shifting from classical motifs to bursts of percussion. "What I enjoyed most about the experience was the fact that everything was so present. It was immediate," Serj says. "There was no thinking about it."

Serart finds these two, seemingly disparate, creative artists joining for a new vision. The two met following Arto's performance at the 2000 Armenian Music Awards. A friendship grew when Arto appeared on Toxicity (he performed on an outro track) and later blossomed into a musical partnership and the desire to expand their respective musical vocabularies, blending cultures and defying genres.

In the vibrant opening track, "Cinema," drum and bass beats get comfortable with scat vocals and jazzy interludes. "Love is the Peace" mixes the sounds of war (guns and bombs) with Arto's haunting voice. The melancholy ballad, "Leave Melody Counting Fear" which mixes acoustic guitar with a Chinese string instrument called a guchin, is a haunting centerpiece of tragic beauty. You'll find a dance club swirl on "Save the Blonde" and Serj's signature socially conscious spoken word over a tropical rain forest feeling track on "Claustrophobia." Another highlight track on the album is "Narina" which features the vocals of singer Jenna Ross.

Nothing is predictable as a sense of discovery pervades every element of the album. "Music is the sound of my life. I don't pretend to lead anyone. I leave it up to one's imagination," Arto says. "What I try to express is love, respect and the truth."