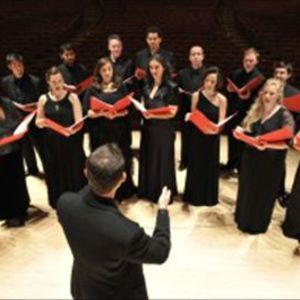 Seraphic Fire is an American professional chamber choir based in Miami, FL. Seraphic Fire collaborated with Shakira on the opening track of her album Oral Fixation Vol. 2 and became the first classical ensemble to be featured on a Billboard 200 rated album (Shakira's album reached No. 5) since the Benedictine Monks of Santo Domingo de Silos Abbey were sampled on Enigma (musical project)'s MCMXC a.D. (also reaching No. 5 on the Billboard 200).

Seraphic Fire has released 4 recordings to date: Beginnings (2005), Bach Motets (2006), Messiah (2007), and Amazing Grace: A Gospel and Bluegrass Journey (2007). A fifth album, Shalom / Pax: Gregorian and Iraqi Jewish Chant, is to be released in the spring of 2008. In May 2006, Seraphic Fire was awarded the ASCAP/Alice Parker Award for Adventurous Programming.

Seraphic Fire is conducted by its founder, Patrick Dupre Quigley.