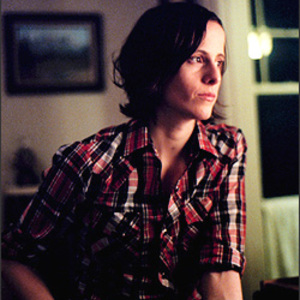 Sera Cahoone is a Seattle based singer-songwriter who got her musical start on the drums at 12 years old. At 21 she left Colorado in favor of Seattle and drummed for indie favorites Carissa's Wierd and later for Band of Horses on their acclaimed release "Everything all the Time." Despite being an accomplished guitar player and songwriter, Sera largely preferred to stay behind the drum kit until one particular tour across the US in 2006.

On that tour, she found herself particular inspired by the landscape outside of the van window, and she wrote an album in her thoughts as they drove along blue highways and back roads of the expansive west and the plains.

When she returned home to Seattle, she fine-tuned those songs on her Martin guitar, and later recorded the album with help from fellow musician friends on a wide array of instruments from pedal steel to banjo.

Her self-titled, self-released debut album reflects her love of both old-school country music and modern low fi, and has been dubbed "the love child of Cat Power and Buck Owens." After it's release in February of 2006, Sera's album was met with wide-spread critical acclaim, including being named one of the top ten albums of 2006 by NPR's Stephen Thompson, and "one of my favorite albums of the year local or not" by KEXP DJ John Richards.

Sera is currently touring off and on in support of her album "Only as the Day Is Long" released on Sub Pop in March of 2008.

From Where I Started

Only As the Day Is Long