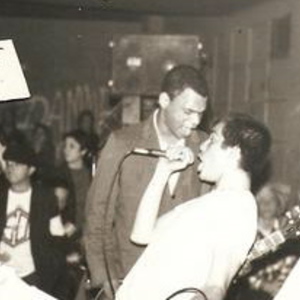 Long Beach CA based Secret Hate was one of many 80's hardcore bands who released one great album, contributed a few tracks to various comps, and unceremoniously faded away, disappeared into time, and were forgotten. Interest in Secret Hate was rekindled after the the band Sublime released a cover of their old song The Ballad Of Johnny Butt on their multi-platinum eponymous major label CD, and Secret Hate briefly reunited for another go in 1998.

They originally began as a group of friends living in Huntington Beach originally from Long Beach, CA, who were all excited by the possibilities the brand new punk scene in England had created for them. They began travelling to LA to go to the hardcore shows happening there. Eventually, after killing time with a guitar, one of them figured out how to play "Shut Down" by The Germs and they decided to start a band. After playing together a few times, the lineup was finalized in 1980 with Mike Davis on vocals, Kevin Roach on bass, Kim Renee on guitar, and Rick Selga on drums. Reggie Rector joined on guitar during The Cave days and Kim went quit and went to play with the glam rock band Kery Doll.

At this time a sense of localism began to develop. The Orange County kids didn't like the Los Angeles kids and the LA kids didn't like the OC kids, and no one liked the Long Beach kids. This caused some strange, violent shows. The only place for Secret Hate to play was in Long Beach, mainly at house parties and in machine shops. The band's biggest help was their friendship with The Minutemen, who had the time slot before Secret Hate at their rented practice space. Secret Hate's album, Vegetables Dancing, was released in 1983 by the Minutemen on their record label, New Alliance Records, and produced by SPOT.

Around this time, most of the band members began getting heavily into drugs, and felt more and more disconnected from the scene because of the increasing violence. Fights were more frequent at shows, and people began forming gangs. Secret Hate recorded a few more songs for compilations, such as the Hell Comes to Your House LP, and When Men Were Men and Sheep Were Scared. Gradually, they began to play less and less shows, and practice even less, uneventfully disbanding around '85.

Guitarist Reggie Rector went on to the band Phantom Opera, who released one album which included at least one unrecorded Secret Hate song. He was murdered shortly after.

Secret Hate reunited in 1998 as a five piece with two new friends playing guitar and have released a new album, which is much more polished-sounding and leans more on the "grungy" indie rock side, but doesn't completely forget their original hardcore sound.

After Kevin moved up to Oregon, vocalist Mike Davis, and Blake Davila formed the band GLUEFACTORY with Mudd Lowther of the Falling Idols, Randy Bradbury of Pennywise, and Chris Bradford from the Deadbeat Dads. Check out the releases Psycho Drops, a split with the 84 Day Syndrome known as The Antonio Vilaraiagosa Golden Expressway, and the split album with Australia's Live@subs known as Transpacific.