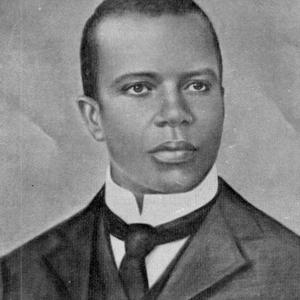 Scott Joplin (born between June 1867 and January 1868, died April 1, 1917) was an American musician and composer of ragtime music. He remains the best-known ragtime figure and is regarded as one of the three most important composers of classic ragtime, along with James Scott and Joseph Lamb. Scott Joplin, the second of six children, was born in eastern Texas, near Linden, to Florence Givins and Giles or Jiles Joplin. For many years, his birthdate was thought to be November 24, 1868; but research by ragtime historian Ed Berlin has revealed this is inaccurate.

Scott Joplin, the second of six children, was born in eastern Texas, near Linden, to Florence Givins and Giles or Jiles Joplin. For many years, his birthdate was thought to be November 24, 1868; but research by ragtime historian Ed Berlin has revealed this is inaccurate.

After 1871, the Joplin family moved to Texarkana, Texas, and Scott's mother cleaned homes so Scott could have a place to practice his music. By 1882 his mother had purchased a piano. Showing musical ability at an early age, the young Joplin received free piano lessons from a German music teacher, Julius Weiss, who gave him a well rounded knowledge of classical music form, which would serve him well in later years and fuel his ambition to create a "classical" form of ragtime. At the 1893 World's Fair, in Chicago, Illinois, he heard the latest music, including the concert band of John Phillip Sousa, who played there daily. He would later further his musical education by attending George R. Smith College in Sedalia, Missouri, studying music theory, harmony, and composition.

By the late 1880s, Scott Joplin had left home to start a life of his own. He may have joined or formed various quartets and other musical groups and traveled around the Midwest to sing. In the Queen City Concert Band, he played first cornet. After organizing The Texas Medley Quartette, he helped them to sing their way to, and back from, Syracuse, New York. He was part of a minstrel troupe in Texarkana about 1891. In 1895, Joplin was in Syracuse, selling two songs, "Please Say You Will" and "A Picture of Her Face".

Despite all his traveling, Joplin's home was in Sedalia, to which he moved in 1894, working as a pianist in the Maple Leaf and the Black 400, social clubs for "respectable [black] gentlemen".

By 1898 Joplin had sold six pieces for the piano. Of the six, only "Original Rags", a compilation of existing melodies that he wrote collaboratively, is a ragtime piece. The other five were "Please Say You Will", "A Picture of Her Face", two marches, and a waltz.

In 1899, Joplin sold what would become one of his most famous pieces, "Maple Leaf Rag", to John Stark & Son, a Sedalia music publisher. Joplin received a one-cent royalty for each copy and ten free copies for his own use, as well as an advance. It has been estimated that Joplin made $360 per year on this piece in his lifetime.

"Maple Leaf Rag" boosted Joplin to the top of the list of ragtime performers and moved ragtime into prominence as a musical form.

With a growing national reputation based on the success of "Maple Leaf Rag", Joplin moved to St. Louis, Missouri, in early 1900 with his new wife, Belle. While living there, from 1900 to 1903, he produced some of his best-known works, "The Entertainer", "Elite Syncopations", "March Majestic", and "Ragtime Dance".

After months of faltering, Joplin continued writing and publishing. He was a best-selling composer of sheet music. With much hard work, he produced the award-winning opera Treemonisha. The score to an earlier ragtime opera by Joplin, A Guest of Honor, is lost.

It's unclear today how advanced Joplin's skills as a pianist were. In 1898, a newspaper in Sedalia referred to him as "one of the best pianists in the world", and in 1911 a New York-based music magazine spoke in glowing terms of Joplin's 'musicianly way' of playing ragtime. However, in St. Louis, opinions differed. Arthur Marshall, a good friend and student of Joplin, said "he played slowly, but exceedingly good..had an execution that you would stand back and listen and wonder how he got to do that stuff". Joe Jordan, another famous ragtime musician, said that although he never played anything other than his own pieces, he did play them well. However, Jordan is also on record as describing Joplin's playing as reminding him of a "stationary Indian". Sam Patterson said Joplin "never played well" and Artie Matthews recalled the delight the Saint Louis players took in outplaying Joplin with his own music. John Stark's own son stated that Joplin was a rather mediocre pianist and that he composed on paper, rather than at the piano. One student of Joplin's recalled in later years he played slowly and methodically, and regularly reminded the student to place a strong accent on the first beat of each measure.

Researcher Edward Berlin theorizes that by the time Joplin reached St Louis, he was already beginning to suffer the physical effects of syphilis, which would take his life in 1917. One of the symptoms, which can manifest up to 20 years prior to death, is discoordination of the fingers. This may explain the differences in opinion of those observing Joplin's playing in the late 1890s and in the early 1910s.

While Joplin never made an audio recording, he did record seven piano rolls in 1916; "Maple Leaf Rag" (for Connorized and Aeolian companies), "Something Doing," "Magnetic Rag," "Ole Miss Rag," "Weeping Willow Rag" and "Pleasant Moments - Ragtime Waltz" (all for Connorized). These are the only records of his playing we have, and are interesting for the embellishments added by Joplin to his Connorized performances, although studying other Connorized rolls of that era reveals they may well have been added during the production process by staff artists, rather than Joplin himself. The roll of "Pleasant Moments" was thought lost until August 2006, when a piano roll collector in New Zealand discovered a surviving copy. It has been claimed that the uneven nature of some of Joplin's piano rolls, such as one of the recordings of "Maple Leaf Rag" mentioned above, documented the extent of Joplin's physical deterioration due to syphilis. A comparison of the two "Maple Leaf Rag" player-piano rolls made by Joplin in 1916, one in April the other in June, has been described as "... shocking. The second version is disorganized and completely distressing to hear." While the irregularities may also be due to the primitive technology used to record the rolls, rolls recorded by other artists for the same company around the same time are noticeably smoother.

Joplin wanted to experiment further with compositions like Treemonisha, but by 1916 he was suffering from the effects of terminal syphilis. He suffered later from dementia, paranoia, paralysis and other symptoms.

In mid-January 1917 Joplin was hospitalized at Manhattan State Hospital in New York City, and friends recounted that he would have bursts of lucidity in which he would jot down lines of music hurriedly before relapsing. Joplin died there on April 1, 1917. Joplin was 49 or 50 years of age (his exact birthdate is unknown).

Joplin's death did not make the headlines for two reasons: Ragtime was quickly losing ground to jazz and the United States would enter World War I within days. He was buried in St. Michael's Cemetery in the Astoria section of Queens.

Joplin's musical papers, including unpublished manuscripts, were willed to Joplin's friend and the executor of his will, musician and composer Wilbur Sweatman. Sweatman took care of these papers and generously shared access to them to those who inquired. However, these were unfortunately few, since Joplin's music had come to be considered pass?. After Sweatman's death in 1961 the papers were last known to go into storage during a legal battle among Sweatman's heirs; their current location is not known, nor even if they still exist.

There was, however, an important find in 1971: a piano roll of the lost "Silver Swan Rag," manufactured sometime around 1914. It had not been published in sheet-music form in Joplin's lifetime. Before this, his only posthumously published piece had been "Reflection Rag," published by Stark in 1917 from an older manuscript he'd kept back. Almost all Joplin scholars agree that the piece is a genuine Joplin composition.

After his death, Joplin's music and ragtime in general waned in popularity as new forms of musical styles, such as jazz and novelty piano, emerged. However, a number of revivals of ragtime have occurred since. Scott Joplin created many different styles of ragtime and made it what it is today.

In 1970, Joplin was inducted in the Songwriters Hall of Fame, by the National Academy of Popular Music.

In the early 1940s, many jazz bands began to include ragtime in their repertoire and released ragtime recordings on 78 RPM records. In 1970, Joshua Rifkin released a Grammy nominated recording of Joplin's rags on the classical label Nonesuch. In 1972, Joplin's opera Treemonisha was finally staged at Morehouse College in Atlanta. Marvin Hamlisch's adaptation of the Joplin rag "The Entertainer," featured in the Oscar-winning film The Sting, reached #3 on the Billboard Hot 100 music chart in 1974. Ironically, Hamlisch's slightly-abbreviated arrangements and performances of Joplin's rags for The Sting, were anachronistic, as the film was set in the 1930s, well past the peak of the ragtime era.

In 1974, Kenneth MacMillan created a ballet for the Royal Ballet, Elite Syncopations, based on tunes by Joplin, Max Morath and others. It is still performed occasionally. The same year saw the premiere by the Los Angeles Ballet of Red Back Book, choreographed by John Clifford to orchestrated Joplin rags from the collection of the same name, as well as to solo piano works of the composer. For this production, music director Clyde Allen orchestrated the previously unorchestrated "Antoinette."

Scott Joplin was awarded a posthumous Pulitzer Prize in 1976 for his special contribution to American music.[7] He also has a star on the St. Louis Walk of Fame. Motown Productions produced a Scott Joplin biographical film starring Billy Dee Williams as Joplin, which was released by Universal Pictures in 1977.

In 1983, the United States Postal Service issued a stamp of the composer as part of its Black Heritage commemorative series.

In 1987 Scott Joplin was inducted in the Big Band and Jazz Hall of Fame.

A Scott Joplin festival takes place each spring in Sedalia. Ragtime players from around the globe perform at numerous locations throughout the town. At the site of the Maple Leaf club, which is now a parking lot, everyone who would like to can sign up to take a turn playing.

In 2002, Scott Joplin ragtime compositions on piano rolls (1900s), was included by the National Recording Preservation Board in the Library of Congress, National Recording Registry. The board selects songs in an annual basis that are "culturally, historically, or aesthetically significant."

Joplin left little doubt as to how his compositions should be performed: as a precaution against the prevailing tendency of the day to up the tempo, he explicitly wrote in many of his scores that "ragtime should never be played fast." According to Joplin biographer Rudi Blesh,

Joplin's injunction needs to be read in the light of his time, when a whole school of "speed" players ... were ruining the fine rags. Most frequently felled by this quack-virtuoso musical mayhem was the Maple Leaf. Joplin's concept of "slow" was probably relative to the destructive prestos of his day.

Inconsistencies exist between certain titles and subtitles, and their respective cover titles, possibly reflecting "an editorial casualness... the substitution of terms would also indicate that the designations: cakewalk, march, two-step, rag, and slow drag were interchangeable, inasmuch as they alluded to a genre of music in duple meter to which a variety of dance steps might be performed."