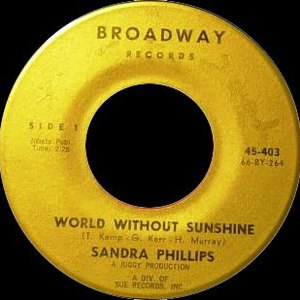 Sandy is an independent singer, songwriter and composer from St. Louis... her original songs draw life from the rich crosscurrents of acoustic folk-rock, pop, and jazz music. The result is vibrant, current, original music with an emotional and timeless feel...her unique approach to this voyage of fantasy is a solo act that continually ascends. In an interview and review of her album, The Renegade wrote: "Sandra Phillips brings a unique sound and vision to the St. Louis music scene, and to the national New Age scene at large. She is worthy of industry attention."

Sandy's music has received airplay throughout the US as well as Europe, Spain, Russia and Germany. Her album Life's Journey has been distributed at the SXSW Music Conference & Festival in Austin, Texas... and her songs have been featured on 4 compilations.

Sandra's originality is evident through fresh and masterfully engaging melodies. Moving from dynamic, instrumentals and full-bodied pop songs to guitar driven voice numbers, the adept ingenuity of her original compositions, artistry and melodic poetry draw listeners into an intimate self-portrait where they may encounter a parallel with their own likeness. Her commitment is inspired by her faith, but her music extends beyond the boundaries of genre classification. Bill Kostyan of TheNightGuide wrote: "Once you hear her music the album becomes a "must have". The artist will not only generate emotions but visions of emotional states. It's actually a unique narration of different emotional states. No one, I mean no one since Gershwin has painted such a beautiful picture for the eyes of my mind."