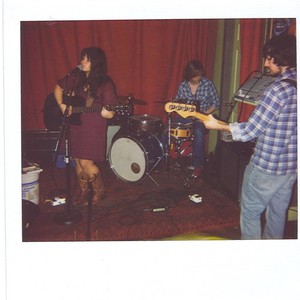 Sometimes music is a collision of opposites. Realities clash and coexist, and the tension that results is scary and strange, but undeniably beautiful. Maybe that's why Samantha Crain & The Midnight Shivers embody so many conflicting unities and clashing identities. With a blow-your-hair-back vocal presence that occasionally yields to whisper-soft vulnerability, Samantha Crain unites the sounds of confidence and desperation.

Traditional folk arrangements tremble beneath the tasteful drumming of Jacob Edwards, the heart-beating bass lines from Andrew Tanz, and Beth Bombara's eerie vocals and clean electric guitar. Lyrics about disaster and despair peacefully coexist with anthems of community and reconciliation. Here are darkness and light; here are life and death.

These colliding realities stem most notably from Crain's unlikely artistic heritage, which she wears on her sleeve but just as readily transcends. Hailing from the state that birthed both The Flaming Lips and Woody Guthrie, Samantha Crain writes with both the brazen conviction of the latter and the unflinching creative ambition of the former. Hers is a folk tradition indebted to Radiohead as much as Bob Dylan. Her shadowy arrangements and razor-sharp lyrics blur whatever superficial lines of genre or aesthetic may seem to separate these influences. It seems whatever the ingredients, she has a place for them in her inexplicable artistic recipe. Her sound is deeply rural and southern, but also itinerant and urban. Like Jack Kerouac before her, Crain is lost on the subway, sleeping in boxcars, leaving lovers behind, and dining in small town obscurity all within a few short days.

Nearly more remarkable than her creative vision is her practical ambition. At the young age of twenty-one, Samantha Crain already has a booking agency, several national tours, and dozens of self-produced recordings to her credit. Her and her band's tireless work ethic promise years of fruitful touring and recording, and their dynamic live performances are gathering a widespread community with every subsequent tour. They are uniting opposites, living deeply, and working fruitfully, with no signs of slowing down any time soon.

Currently they are playing shows and promoting the Confiscation EP which was released Summer 2007. It was produced by Joey Lemon of the Chicago-based band, Berry.

You Had Me At Goodbye

Songs In The Night